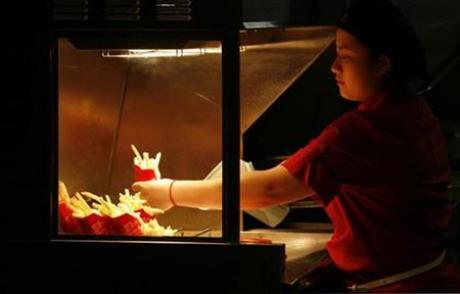 A staff member prepares French fries at a McDonald’s restaurant in the southern city of Shenzhen January 29, 2010.
McDonald’s, whose Golden Arches emblem is identified as an American cultural symbol, will offer a new "McWedding" service for couples in Hong Kong next year, local media reported.

McDonald’s will offer "McWeddings" at three restaurants in Hong Kong, and will also host anniversary events, according to the Chinese-language Oriental Daily.

"Traditional weddings use cherries for the newlyweds to eat together and kiss. We will have French fries for them to kiss," the English-language newspaper South China Morning Post quoted Helen Cheung at McDonald’s as saying.

"People said they’d dated here (McDonald’s restaurants), or met here, and wanted to get married here … We see this as a business chance," said Cheung, McDonald’s director of corporate communications and relations in Hong Kong.

McDonald’s started to accept reservation last week, Oriental Daily reported, adding at least one Hong Kong couple planned to take the chance as they often dated at McDonald’s before they were engaged recently.

No price tag is mentioned in local media reports for the new "McWedding" service.

The traditional big Chinese wedding plan has become a growing burden for many young Hong Kongers.

A table for 10 persons at a five-star hotel restaurant in Hong Kong can easily cost more than HK$10,000 ($1,300) and traditional Hong Kong families usually like to host a dozen or more tables.

SOURCE: reuters.com
Editorial Message
This site contains materials from other clearly stated media sources for the purpose of discussion stimulation and content enrichment among our members only.
whatsonsanya.com does not necessarily endorse their views or the accuracy of their content. For copyright infringement issues please contact editor@whatsonsanya.com

Previous news: Hainan to brace for this year’s strongest typhoon, Megi to add to flood woes