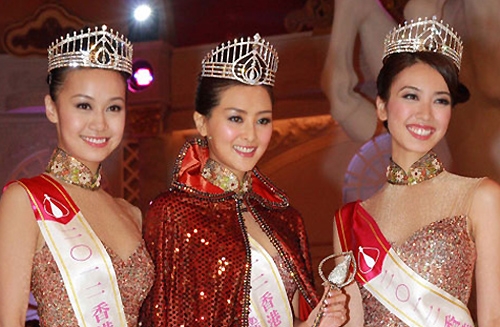 First runner-up, Jacqueline Wong, is a 23-year-old masters student, whose aspiration is to live a full and exciting life without any regrets.

Second runner-up, Tracy Chung, is a 24-year-old Administrative Assistant with an undergraduate degree. Tracy was a semi-popular candidate at the beginning of the pageant. However, she continued to lose weight and put forth a good performance on the evening of the pageant.

Jennifer Shum won the Miss Photogenic Award. The 23-year-old Masters student has expressed the desire to become a clinical psychologist.

TVB Servers Unable to Handle Large Volume of Live Votes
Due to the revised format of this year’s pageant, the judging panel selected the top 3 candidates, while live audience’s votes were to determine the actual winner. However, TVB experienced a technical glitch and was unable to handle the large volume of live votes, resulting in its servers crashing. Many frustrated voters were unable to place their votes.

As a result, the judges’ votes determined the outcome of the final pageant results. Online Hong Kong forums have since been flooded with disappointed remarks that they were unable to select the final winner.

Hot Favorite Roxanne Tong Unable to Be Placed
Kent Tong’s niece, Roxanne Tong, was the hot favorite to win the crown since the official candidates were announced. Along with Amy Cheung, and Jennifer Shum, Roxanne Tong had survived numerous elimination rounds to remain as the final 6 candidates. However, the women were unable to advance further in the last hour of the pageant.

In the pageant finals, Roxanne had a question-and-answer exchange with Kay Tse. When Roxanne indicated that she enjoys listening to Kay’s music, Kay asked Roxanne to sing one of her songs. Roxanne sang one line to Kay’s signature song, Wedding Invitation Street and was unable to continue.

Furthermore, it was uncertain whether Roxanne’s rumors throughout the pageant had affected her inability to place within the top 3 winners. Possessing flagrant negative rumors, Roxanne allegedly had colorful nightlife habits and also “bullied” another pageant contestant, Melanie McAndrew, while filming together in London.

Overseas Candidates’ Cantonese Weak
Overseas candidates, Amy Cheung and Melanie McAndrew’s weak Cantonese may have undermined their performance on the pageant finals night. New York native, Amy Cheung, spoke in heavily accented Cantonese. Hailing from Australia, Melanie McAndrew was asked in the interview segment how many times she had dated in the past. She replied, “Three months.” Seeing the audience reaction and realizing that her response did not make any sense, Melanie asked the questions to be repeated and finally answered that she has not dated in the past

SOURCE: jaynestars.com
Editorial Message
This site contains materials from other clearly stated media sources for the purpose of discussion stimulation and content enrichment among our members only.
whatsonsanya.com does not necessarily endorse their views or the accuracy of their content. For copyright infringement issues please contact editor@whatsonsanya.com