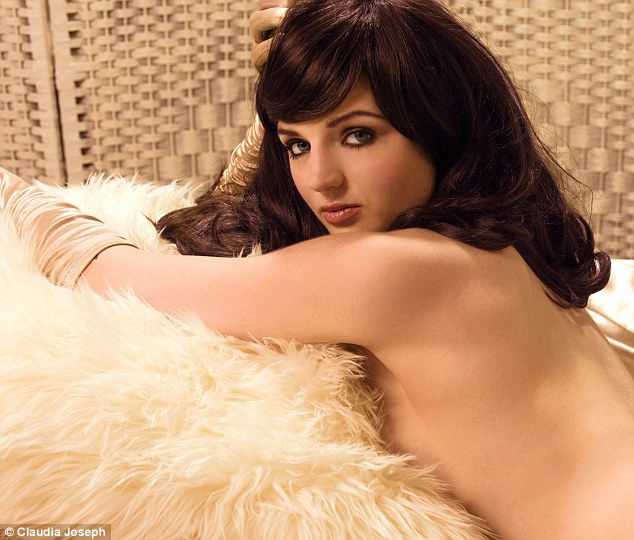 Ker-ching! Katrina Darling in one of her poses for the magazine

By day Katrina Darling worked in wealth management at Barclays, by night she stripped off and danced
Not so long ago she was wiggling her way around the clubs of Sunderland as a cheeky Burlesque dancer.

Then, thanks to good old family tree research, Katrina Darling discovered she was a cousin of the Duchess of Cambridge.

In one spread, she strikes a sultry pose as she lies topless on a sheepskin rug.

Miss Darling gained notoriety before last year’s Royal Wedding after her links to Kate were revealed.

The pair are second cousins, once removed, with Miss Darling’s grandmother being sister to the duchess’s great grandfather Thomas Harrison.

The provocative performer has never met her cousin, who one day will be Queen.

Miss Darling, who has never made any attempt to contact the Middletons, insisted that she had been a burlesque dancer for years and the recent success and attention is just a happy coincidence.

But that didn’t stop her choreographing a burlesque routine to mark the Jubilee, titled God Save the Queen – which she performed earlier this year at Whisky Mist nightclub.

At the start of the act, Miss Darling donned a figure hugging red corset teamed with a union jack skirt and small crown perched on her head. But as the anthem got going she stripped off completely, revealing bright red nipple tassels and a thong.

Until earlier this year, the dancer spent her days as a banker at Barclays, where she never hid her late night escapades.

She claimed the team who worked alongside her in the private wealth management division treated her hobby as a source of amusement.

Speaking in March, she said: ‘Everybody is really supportive. They think it’s a bit of fun.’

The dancer has since decided to take her act to New York to cash in on her newfound fame and the royal connection.

Next news: 10 star-related hotels to settle down in Wanning Shenzhou Peninsula