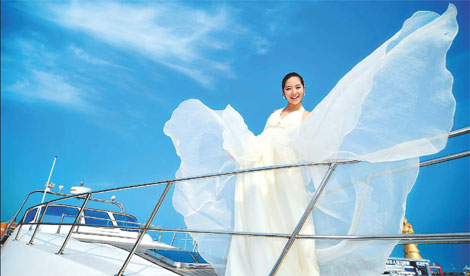 A model wearing a wedding gown on a yacht of St. Valentine International Sailing Club.
BEIJING, Aug. 5 (Xinhuanet) — Images of cruising yachts in movies are still associated with the unattainably luxurious lifestyle of the exceedingly rich by many Chinese mainlanders.

But with a wider range of sailors-to-be now taking professional lessons and obtaining their sailing licenses, private yacht voyages with family and friends are becoming a realistic recreational option for many.

"For this year’s summer session of courses, we have the highest number of enrollees so far – 40," says Wang Qiaoyu, with Yinhai Yacht Driving Training School at coastal city Qingdao, Shandong province. "It’s double that of previous years."

Located at eastern Qingdao’s yacht marina and opened in 2005, the school is among the country’s first to train future mariners for noncommercial sailing. Yacht training schools have mushroomed in the country’s major costal cities. At present, there are more than 20 schools and 2,000 licensed sailors, says Li Daze, an official in charge of issuing yacht licenses with the China Maritime Safety Administration (CMSA).

"The country’s economic development and increasing openness to foreign exchanges have made yachting a more recognizable recreation," he says.

According to Li, the yacht business takes off once an area’s per capita GDP has reached $ 5,000, which applies to a considerable number of Chinese cities.

But not only are the rich thinking about yachting. Even post-1990 high school graduates like Li Haoran, now a trading major freshman at a Qingdao university, are getting their licenses.

Xin Xianlei, who runs Yinhai International Yacht Club and the school, says the learners are largely divided into three groups: those who do it for fun, those as a social activity and those for work.

"As to the last kind, they’re people who operate yachts as their jobs," Xin says.

Dalian-based Peninsula Morning Post reported that the monthly wages for a private yacht driver was 5,000 to 6,000 yuan ($738-886). While in Hainan province, where the yachting business is booming, it’s up to 10,000 yuan, Xin says.

Piao Jing, 30, an employee with Xin’s yacht club, finished the courses last year and has over one year of yachting experience. "I used to think that yachts had nothing to do with me," He says. "Now that I’m trained to work with them and I know more about them, I think yachting isn’t beyond the reach of ordinary people. It will just take time for it to become more popular."

He says that the number of yachts is rapidly increasing around Qingdao harbors, especially after hosting the 2008 Olympic sailing events.

Xie Silin started learning to sail this June with four colleagues from Qingdao Waterwish Boat Manufacturing LTD, a pleasure boat manufacturer. Xie says he is learning for his own pleasure besides work.

Jenny Zhao, 39, a Qingdao native, is the only woman trainee in Xie’s class.

"Sailing a yacht is like driving a car in slow motion," Zhao says. "It’s even easier because the traffic is much lighter than on the road."

But she adds that the sea is a much more complex environment than the blacktop, thus the training fee of 12,000 yuan is reasonable.

Before learning to drive a yacht, Zhao and others take lessons on seamanship, safety, and boat mechanics.

Zhao expects to obtain her license and cheerfully envisions a family voyage, which is the reason she enrolled for the lessons.

She doesn’t think that yachting is a luxury. "To enjoy the offshore delights you need to sail a boat," she says.

However, instead of buying a boat, Zhao says she will rent.

"Considering the extra cost on berthing and maintenance, no small amount, I’m thinking to rent several times a year," she says.

While renting provides an economical approach to sailing, most of those taking the courses are planning to buy.

"The price of smaller yachts varies between 100,000 to one million yuan," Xin says. "And if shared among like-minded friends, the expenses might be reasonable. I know two groups of fishing-lovers who bought boats recently, each member paid 40,000 to 50,000 yuan."

Outdoor sports lover Ron Gao, a 42-year-old investment consultant, drives from Beijing to Qingdao every week to attend the classes. "With more encouragement from the policy-makers, I believe yacht ownership will increase faster than that of the cars," he says.