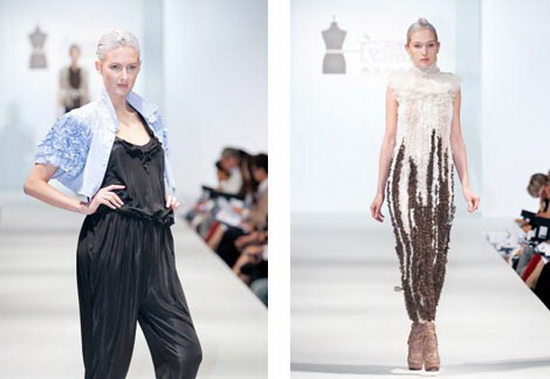 Janko Lam’s winning designs at the Ecochic Design Award in Hong Kong in 2011 earn her a project with Esprit to make a collection from the brand’s own fabric waste. (China Daily)
Garbage collectors must wish there were more designers like Janko Lam. The Hainan province native has just created a fashion collection for Esprit, using materials that would have ended up in a landfill.

She made jeans, T-shirts, shorts, dresses, vests, a skirt and a jacket from the brand’s own fabric waste and unused clothing.

Lam’s denim pieces incorporate patches in different shades of blue, while her T-shirts are in grainy pinks, purples and grays – a result of blending multicolored leftover fabrics. The T-shirts were purposely not re-dyed, Esprit says, to keep production as eco-friendly as possible.

"Using discarded materials really entails more discipline and creativity," Lam says by phone from Hong Kong, where she went to design school and has lived for the past 16 years.

"You have to follow sustainable guidelines, as well as experiment with a lot of patterns."

Fortunately, she has had practice.

Mutt Museum, the fashion label she co-founded in 2010, after working for a Hong Kong TV station designing costumes, primarily uses salvaged materials. Its cheongsams are also made from recycled fabric waste and its fashion accessories from wood scraps.

Hong Kong, where Redress is based, dumps an average 234 tons of textile waste into landfills every day, according to 2010 figures from the city’s environmental protection department.

On the mainland – the world’s largest garment exporter – producers of cotton garments alone discard 800,000 tons of textile waste every year.

"And the figure is still increasing," Gong Yan, an associate professor at the Beijing Institute of Fashion Technology, who studies garment materials, says.

Chinese clothing factories, he says, dispose of unwanted textiles in various ways, including sending them to landfills, burning them and burying them. But these practices aren’t sustainable.

"They limit the scope of recycling, as well as waste resources and produce pollution," Gong, a member of the All-China Environment Federation’s research committee on environmental protection standards, says.

"Since synthetic fibers do not easily decompose, the soil where they are in the landfill will harden. At the same time, harmful particles from the textile waste will seep into the earth and groundwater. Burning, on the other hand, will generate a lot of dust and carbon dioxide, and affect the environment."

Using discarded or recycled materials as a response to environmental degradation is becoming more common in the fashion world. But designers like Lam are still rare in China.

"In general, the wealthy, developed countries produce the most waste, and perhaps for this reason, this (trend) is happening more in them," Timo Rissanen, assistant professor of fashion design and sustainability at Parsons The New School for Design in New York, tells China Daily.

This year, Redress has brought the Ecochic Design contest to the Chinese mainland. The winner, to be named during the Shanghai Fashion Week in October, will also create a recycled collection for Esprit, which wants to use its fabric waste. Like Lam’s designs, these designer pieces will be sold only in selected Esprit stores in the country.

To assure shoppers that these recycled garments are not only eco-conscious but also new and hygienic, Redress came up with the R Certificate (patent pending).

"The need to identify to consumers that the recycled content was clean and ‘factory fresh’ is particularly important for Asian consumers, who, on the whole, tend to be more suspicious and conscious about wearing secondhand products," Christina Dean, the British founder and CEO of Redress, says.

She says more retailers are interested in obtaining the certification, which enables consumers to track where the garments were created, as well as how green they are.

Such initiatives, though still in the margins of the fashion universe, are votes for a cleaner choice.

"It’s unbelievable now to think that cheap fashion, fast fashion … will suddenly disappear and everything will be eco-friendly. I think it’s impossible to imagine. But equally, what we need to do is to make way for an alternative."

This is exactly what Lam is trying to do.

Previous news: Telefonica leads out into open water as VOR fleet set out on final leg to Galway