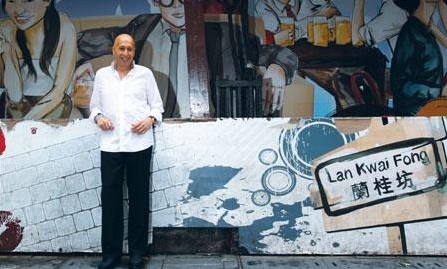 Entrepreneur, innovator, motivator, adventurer, Allan Zeman opened his first restaurant in Lan Kwai Fong in the early 1980s. The event marked the beginning of the transformation of a backstreet into a trendy little corner a few blocks from the city’s business center. Today Zeman owns nearly 70 percent of the properties there, running a number of exotic restaurants, bars and clubs, while leasing shop spaces to other operators.

When Zeman was appointed by the government as chairman of Ocean Park in 2004, attendance at the theme park was low. The operation was in the red. Within a few years, his vision and entrepreneurship turned the tide and guided what had been viewed as more of a local attraction into one of the best aquatic parks in the world.

Lan Kwai Fong and Ocean Park are two different concepts, he admits. The entertainment district is a personal venture, while the theme park is a public service, for which he received no payment. His creative and innovative flair played a big part in both success stories.

“I fell in love with Hong Kong when I first came here at the age of 19,” Zeman told China Daily in an exclusive interview. “Hong Kong is every businessman’s dream. If you have a dream, you can make the dream happen the next day.”

The year after arriving in Hong Kong, he opened a fashion company, exporting clothes. He preferred to treat foreign buyers and designers to lunch or dinner at restaurants that had a casual flair. All the good restaurants back then were in the hotels. So, he opened his own restaurant in Lan Kwai Fong. It was around then that Zeman introduced the Halloween tradition to Hong Kong.

His garment business did well, but he decided to sell out in 2001. After settling on a good price, Zeman turned his attention to building his entertainment kingdom.

His enterprising spirit prompted others to open restaurants and bars in Hong Kong. The Lan Kwai Fong model spread to mainland cities: Shanghai, Chengdu and Haikou. In the next five years, he plans to open four Lan Kwai Fong establishments on the mainland.

“The Lan Kwai Fong in each place is a culture and presents a lifestyle. China is changing very quickly, getting very internationalized and is more ready to accept Western things.

“Ocean Park is for families, kids and parents. It is for education, conservation, environment, oceans and animals. We teach people the importance of a green environment in an entertaining way. At Ocean Park, I work with a very good team, together we come up with fresh inspiration making it a totally different experience,” he said.

Before he became chairman, Ocean Park was just a local theme park with yearly attendance of around 2 million. It has emerged as one of the world’s top five aquatic parks with attendance edging to 7 million.

“When I went there, I felt it was very important for Ocean Park to become world-class, knowing Disney was coming to Hong Kong,” he recalled. “So we put a vision together, put designers together and reached for the moon. It is all about creativity, innovation, that drive us to think of new things to make people happy. There has been rapid growth for eight years, since I went there. Indeed, for a local theme park running in typical government style, you would not survive if you were to lose money every year.”

“Hong Kong is stuck in arguing, filibustering and losing sight of the big picture,” he cautioned. “The most important thing is we now have a new CE and he wants to change the government structure, notably the creation of a cultural bureau and Information Technology reaffirmed as a major policy area. It is important to let him move forward and change Hong Kong from what it was in the past. We are also close to 2017 when universal suffrage takes place. This will give the government greater legitimacy to move forward more easily.”

After the battle, a time for unity

Allan Zeman believes Hong Kong is well past due for social reconciliation after the Chief Executive election in March.

As a staunch supporter of Henry Tang who lost in his bid for the top post, Zeman was among the first to step forward and called people to stand with the new leader Leung Chun-ying. He has been among the clearest voices speaking out in favor of a “big reconciliation” in the city’s pro-establishment political camp. He shares the view of the Chief Executive-elect that now that the election is over, the Leung camp, the Tang camp and the (Albert) Ho camp have dissolved, leaving only the Hong Kong camp.

In the final stages of the election campaign when Tang’s chances of being elected appeared doomed, Zeman openly said Leung is a “good man” and said he would support him after the election.

“We need to move forward. Once CY won the election, I felt, the King is there. Long live the King,” Zeman said. “I respect him because he ran a very good campaign, starting as a long shot. I think more and more people understand that it will benefit Hong Kong if we forget the past and move forward. The past is already gone.”

Leung has been a friend for 30 years, Zeman disclosed. They spoke on election day after the ballots were tallied. They exchange phone calls and SMS frequently. They also had dinner the night before the interview.

When asked to comment on the incoming leader’s capabilities to unite people and cohere consensus, Zeman said it is important to see what the governing team is, because it is not about just one man.

“He needs a strong team to implement his visions. He also needs to make sure that once he has a team together, he has a good plan to identify what needs to be changed, taking a step by step approach, just as he did during the election campaign, to get the public behind him more than Henry did.

“As people generally resist changes, it is important that the changes take place from the people, in conjunction with the people, so that they will help make this happen. So I think if you get the public behind you, LegCo will not have the chance to block you,” he said, laughing.

Since Leung is not from the government or civil service, he will surely bring in a different style of management. “I think CY really cares about the people and the masses. Once he creates a closer relationship with business, society and the masses, he will gain the confidence of the business people, who are still sitting on the fences, worrying, although they want to support him,” Zeman observed.

“In the interest of Hong Kong, there is no point to fight. Fighting never solves anything but stops everything. So I think it is really important for Hong Kong to get behind him. I think the next year will be crucial for everyone to understand his policies, to see how they affect their lives from all aspects and then see how to move forward. It has to be done step by step and he obviously has the ability to become the chief executive.”

Born in 1948 in Germany of Jewish origin, Allan Zeman applied for naturalization in 2008, giving up his Canadian citizenship to become a Hong Kong citizen. He confessed that when he made the decision, everybody was “shocked” though his family never questioned what he did.

“I just felt when I woke up one day, I said I have lived here almost all my life. I have done so many things for Hong Kong and China. The last time I went to Canada was 15 years ago and I really know very little about Canada. Though I hold a Canadian passport, I just don’t feel like being a Canadian,” he recalled. “I love Hong Kong. I love China. I have seen changes taking place. It must be at this stage of my life for me to become a Chinese.”

After obtaining Hong Kong citizenship, he became eligible for the Home Entry Permit, allowing him to visit the mainland freely.

Yet Zeman is the only one in the family who has naturalized. His wife and children still maintain their Canadian citizenship. “They are very localized in terms of Hong Kong life,” he said with great enthusiasm. “My son and daughter have lived all their life here. My son speaks Cantonese, Putonghua and married a Chinese girl, while my daughter owns a fashion company here.”

Allan Zeman is the founder and chairman of the Lan Kwai Fong Group, the major property owner and developer of Lan Kwai Fong. The neighborhood has been transformed into an entertainment hot spot, and a must-see tourist attraction. Zeman holds a number of posts in various public services, including chairman of Ocean Park, board member of the West Kowloon Cultural District Authority and chairman of its Performing Arts Committee. In 2011, he was awarded the Grand Bauhinia Medal, the highest honor awarded by the Hong Kong SAR government.

Next news: 25 top baristas to compete at 1st Int’l Barista Championship in Fushan