Brit Michelle Dockery wears nothing but diamonds for Vanity Fair Cover stars: Michelle Dockery (bottom) wears only a diamond bracelet and necklace as she appears with (from left) Juliana Margulies, Claire Danes and Sophia Vergara in the May issue of Vanity Fair
Lady Grantham would certainly disapprove.

The British actress marked her arrival as a transatlantic star by posing nude with three stars of the American small screen.

The 30-year-old shares the front cover of May’s issue of Vanity Fair magazine with Claire Danes, 32, the star of Channel 4 hit Homeland as well as 45-year-old Julianna Margulies from The Good Wife and Modern Family star Sofia Vergara, 39.

Wearing only a diamond bracelet and necklace, Miss Dockery seems to have been banished to the foot of the bed while her glamorous television colleagues snuggle together under the sheets – although that does make her rather more prominent on the front cover of the magazine.

The actress has become a surprise star in the Stataes. on the back of her role as Downton Abbey’s Lady Mary Crawley.

With its gentle evocation of a bygone age, the ITV costume drama has been as big a hit across the Atlantic as in Britain, winning a Golden Globe for best mini-series in January and four Emmy awards.

Miss Dockery has made the most of her new-found fame, making guest appearances on two of America’s biggest chat shows, The View, and The Late Show with David Letterman. 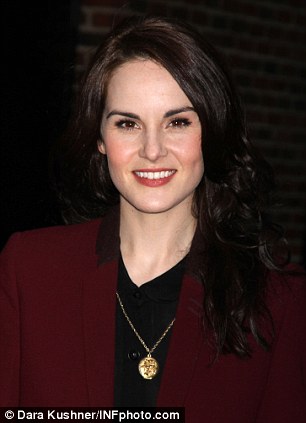 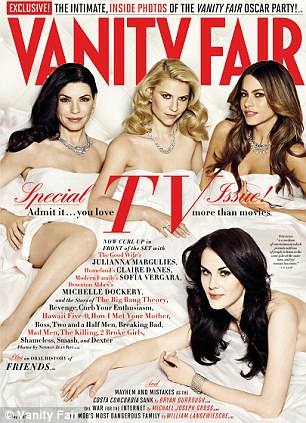 U.S. favourite: Left, Michelle Dockery in a more modest state of dress than on the cover of Vanity Fair, right
The Essex-born star told Mr Letterman: ‘I come from a very working class background, so my family would’ve been downstairs in the past. People are often surprised to hear I’m not actually posh.’
Meanwhile her co-star Dan Stevens – who plays Matthew Crawley in the drama – looks set to secure future acting parts in America after signing with U.S. talent agency WME.

The Romeo and Juliet actress stars alongside British actor Damian Lewis in the spy thriller, which airs on Channel 4 on Sunday evenings.

He said: ‘To me, all success is a delightful surprise, since one can absolutely never predict it. I was tremendously pleased when it became apparent that the show had gone down well in America.
‘What the Americans want to see is life in their drama. Life of all sorts: hard lives, easy lives, or lives which, like most of ours, are a mixture of the two.
‘If we are popular there, then I would suggest, again rather timidly, that we have managed to get some of that into the drawing rooms and sculleries of Downton Abbey.’ The May issue of Vanity Fair is on sale this Friday.