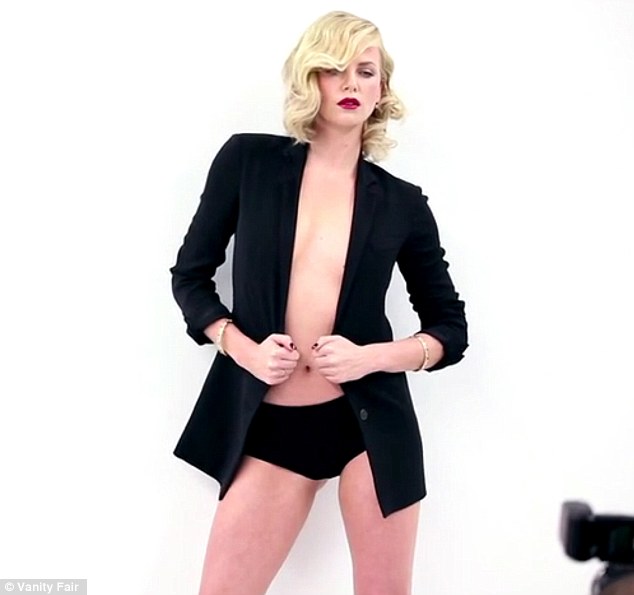 Nothing else needed: Charlize Theron is seen wearing just a blazer and a pair of knickers as she poses for a shoot for Vanity Fair
She strips off completely naked to advertise Dior’s perfume so it’s clear she isn’t shy.

And it’s quite clear that Charlize Theron is comfortable in her own skin wearing just her underwear and a blazer in her latest photoshoot for Vanity Fair.

The South African model, 36, is seen dressed in just a pair of knickers the jacket and nothing else as she poses against a white backdrop.

With her signature blonde locks falling around her face she is seen pouting into the camera with bright red lips.

The actress clearly knows how to work her body as she strokes her arms, twists her hair and pulls the blazer open and shut again. 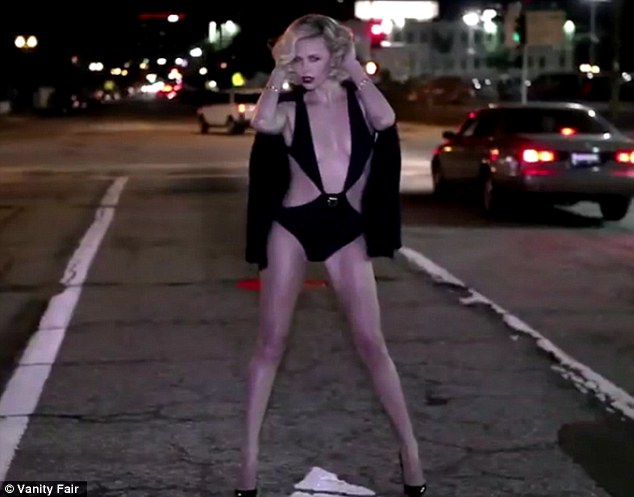 Traffic-stopping: The 36-year-old actress posed in a cutaway swimsuit as she stood in the middle of a road for the high- fashion shoot

Leggy lady: The South African star put her perfect pins on show as she strutted her stuff on the street
The magazine also takes the shoot outside and Charlize is seen strutting her stuff in a low cut skimpy swimsuit, draping the blazer around her shoulders.

She stands in the middle of an empty road in one shot but as the screen pans out traffic is seen passing by her.

Her lengthy legs, which are enviably slim appear endless in her high heels as she struts past the camera.

In the interview the actress reveals she used to harbor an unlikely crush.

Charlize confesses: ‘I was so in love with Richard Dean Anderson, MacGyver.’

Earlier this month the actress was seen on a shoot for her film Snow White, which she stars in alongside Kristen Stewart.

The actress was seen cradling a friend’s baby in between takes which showed off her maternal side. 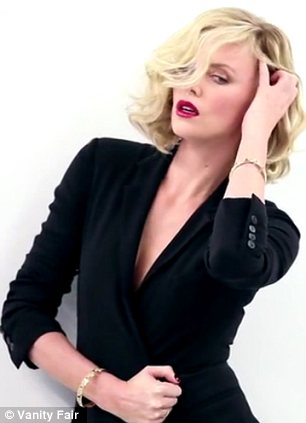 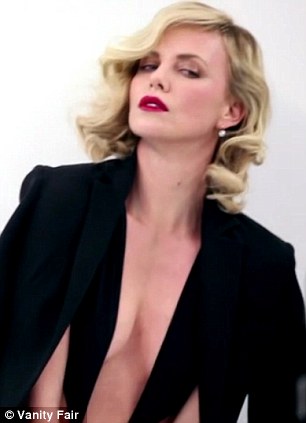 Showing a little skin: Charlize was seen running her fingers through her hair and opening and closing the lapels of the coat to reveal more flesh
Speculation has been rife that the actress wants to adopt a child, joining the likes of Sandra Bullock and Angelina Jolie.

She told Germany’s In Touch magazine: ‘I want a baby. If it would happen tomorrow I would be very happy.’

When asked if she would consider adopting as a single mother she said: ‘Why Not? I’m open to everything in life.’

Charlize has previously spoken out about adoption when she said: ‘There are so many unwanted children on this earth and it’s our job to care for them. And if we don’t we’re doing the world a disservice.’

A synopsis offered by Universal pictures outlines the film saying: ‘Snow White and the Huntsman is a new take on the classic fairy tale which features an expanded role for the Huntsman.

‘In the fairy tale, he is ordered to take Snow White into the woods and kill her, but instead lets her go. In the new take, the Huntsman is not a love interest but acts more as a mentor, teaching Snow White to fight and survive.’