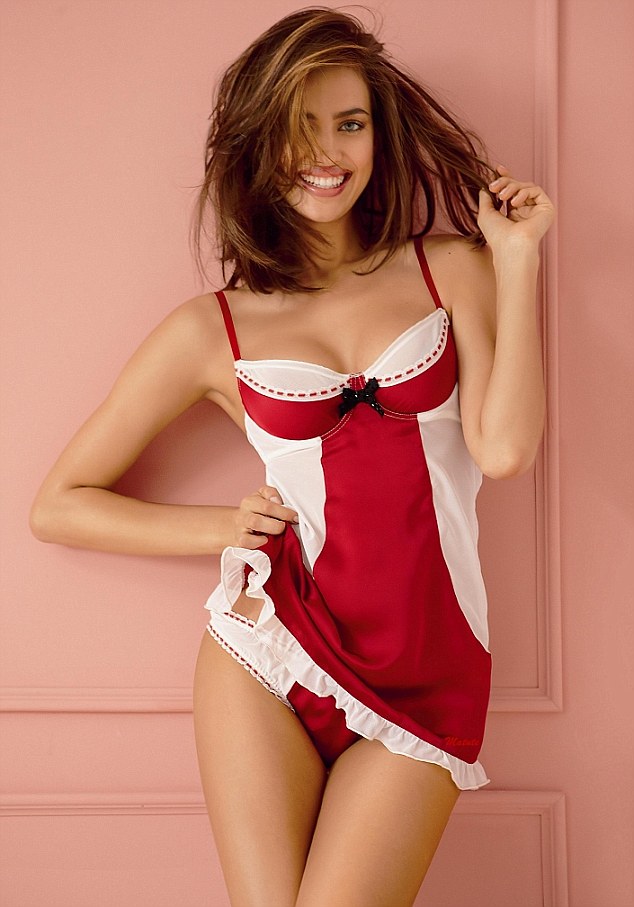 The photographs, for Italian lingerie brand Intimissimi, showcase the model – girlfriend of football superstar Cristiano Ronaldo – showing off her figure in a selection of pretty underwear.

Posing in cheeky red satin knickers embellished with a bow, and modelling a diaphanous black lace camisole in another, Ms Shayk demonstrates just why she is in such high demand as one of the world’s top lingerie models.

It is the latest in a line of several campaigns the model has shot with Intimissimi’s parent brand Calcedonia, who were one of the first lingerie brands to ‘discover’ Ms Shayk.

Just last week the model posed topless on the front cover of Esquire magazine, and in an interview inside revealed that she had been offered ‘so much money’ to pose naked for Playboy magazine.

But despite feeling more than comfortable stripped down to skimpy briefs, Ms Shayk said that baring all would be a step too far.

‘I would never do Playboy. Yes, I am a lingerie model, but I have class. Playboy offered me so much money last year. I was like: "No. Way."

‘Alright Naomi Campbell and Claudia Schiffer did it. But they did it at the end of their career and it was classy. I think of myself as a cover girl. But I would never do some kind of cheesy magazine.’

The model, who graced the cover of Sport Illustrated’s coveted swimsuit issue last year, also spoke of her love of high heels and short skirts – claiming boys didn’t like her when she was young and that she was picked on because of her darker complexion.

Last laugh: Girls at Ms Shayk’s school teased her for being skinny, while boys wouldn’t date her because her skin was too dark
She said: ‘I love high heels from the age of 10! Short skirts and then high heels. My classmates used to make fun of me. Like, "Ooh, she’s so skinny and she’s wearing high heels.’

‘But I just wore what I like and I didn’t care about people’s opinions, the same as I don’t care now. Boys never liked me at school. They made fun of me ‘cos I had dark skin.’

She also remarked that being stupid is not the way to secure a long and fruitful career.

Irina said: ‘No one wants to work with a stupid girl. You have to be beautiful on the inside, then people will want to continue to work with you.

Cheeky! Irina says she would never pose for a ‘cheesy’ magazine like Playboy. ‘I’m a lingerie model, but I have class,’ she said
Ms Shayk met Ronaldo last year after they modelled together for the Armani Exchange campaigns, and are said to have been dating since early 2010.

In February last year Irina and Ronaldo were reported to be engaged after he apparently jetted all the way from Spain to New York to propose to the Russian beauty on Valentine’s Day.

The Real Madrid star is already father to a baby boy. Ronaldo became a father on June 17 when a mystery woman gave birth to Cristiano Ronaldo Jr.

His mother Dolores is helping raise the baby between Madrid and Portugal. The identity of the baby’s mother has never been revealed. 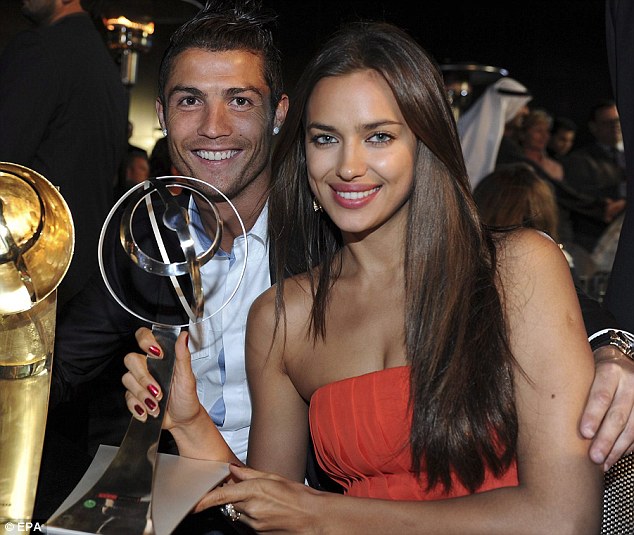 Engaged: Real Madrid player, Portuguese Cristiano Ronaldo poses with Irina Shayk at a football awards ceremony last month
SOURCE: Daily Mail
Editorial Message
This site contains materials from other clearly stated media sources for the purpose of discussion stimulation and content enrichment among our members only.
whatsonsanya.com does not necessarily endorse their views or the accuracy of their content. For copyright infringement issues please contact editor@whatsonsanya.com