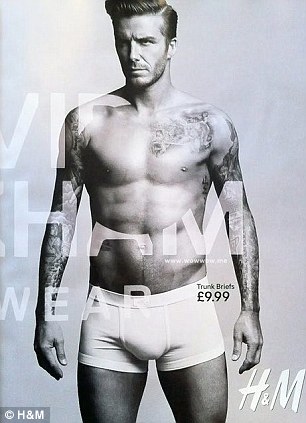 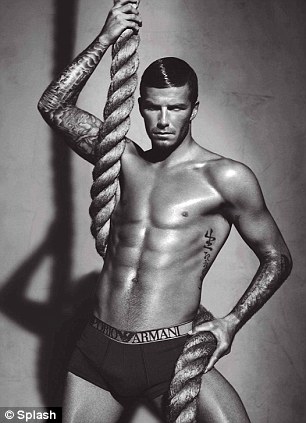 Spot the difference: David Beckham shows off his bulge again in his new underwear range for H&M but it looks very similar to his campaign for Armani back in 2009
Fans have been excited to see David Beckham in his underwear ever since he announced his new campaign back in July – and now the wait is over.

New images showing the 36-year-old footballer posing in tight briefs for retail fashion chain H&M were released today and are bound to please the ladies.

David is showing off his toned body, his extensive body art and of course an impressive package in the advertisement for his own bodywear.

Wearing a pair of tight white trunk briefs – that will retail at £9.99 a pair – the father-of-four looks mean and moody as he stares into the distance.

The image bears many similarities to that of David’s previous campaign with Italian designer brand Armani who he first modelled for in 2007.

‘I am a lingerie model, but I have class… and would never do Playboy’: says Ronaldo’s girlfriend Irina Shayk as she poses semi-nude in new photoshoot

The only props missing from his latest campaign are a giant rope, lots of hair gel and a bottle of baby oil. 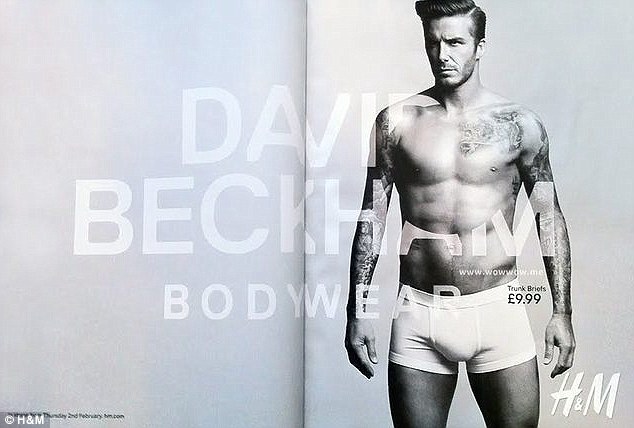 Cheap briefs: The white underwear that the footballer is modelling will cost £9.99 and will be available to buy on February 2
The sportsman caused quite a stir two years ago when he revealed his bulge in the black designer briefs, and even opted for a skimpier pair in an image that saw him laying down wearing an unbuttoned white shirt.

Of course the high-street brand is worlds away from Armani, but men will still be pleased to know they can wear a pair of David’s designs.

Earlier this year, the LA Galaxy star spoke of his plans to branch out into the fashion industry.

‘I have had the idea of doing a bodywear collection for some time now,’ he told WWD.

Showing off: Beckham enjoyed a three year contract with the Italian designer brand
‘The push to do something of my own really came as a result of my collaboration with Armani.’

David’s appearance on giant billboards across the world worked extremely well for the designer brand and resulted in a doubling of profits for the company in one year.

‘It proved to me that there is a real market for good-looking, well-made men’s bodywear,’ he continued.

‘I can’t wait to show people the collection – although I’m not sure my mum will be too happy seeing a billboard image of me in underwear again.’

The new range will be available to buy in H&M stores from February 2 – just in time for Valentine’s Day.

Big hit: Armani’s profits doubled following David’s campaign which is seen being unveiled here at Selfridges in London in June 2009
The Swedish retailers are no doubt hoping that they will make the perfect gift for women to present their husbands and boyfriends with.

Perhaps David will sport a pair for the annual romantic date with his wife Victoria, but one thing’s for sure – they won’t be spending it in Paris.

Today it was revealed that David will not be making the move to the French capital to play for Paris Saint Germain.

In what would have been a coup for the French side, Becks turned down a lucrative offer to join ex-Chelsea boss Carlo Ancelotti after citing ‘family reasons’ for his refusal.

The footballer, who is currently in the UK with his family on a winter break from America after winning the MLS title last November, is now expected to sign a new deal with LA Galaxy.