Miss Scotland Mimnagh is in China for the Miss World Pageant 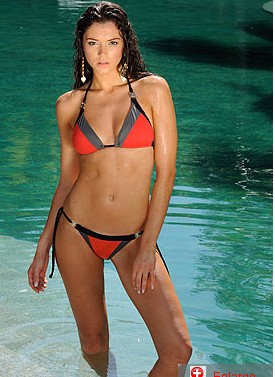 Bikini babe … Nicola Mimnagh
The 24-year-old, from Kilbarchan, Renfrewshire, is touring the country with the 120 contestants ahead of the grand final at Sanya’s Crowne Plaza on October 30. Here’s week two of Nicola’s diary…
FRIDAY, October 8: Today we were up at 5am to leave Ordos, Mongolia. It was a fantastic experience but I was very excited to be heading to Shanghai at last. 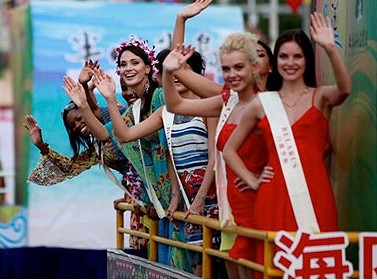 Reigning on their parade … beauty queens wave to locals in Sanya
Miss World The flight was just over two hours and I was sitting next to Miss Slovakia, who is trying to learn English, so I was chatting to her with the help of her electronic translator.
There was a funny moment when we got on to the topic of exercise and I said I enjoyed spinning.
Cue ten minutes trying to explain what spin was! It roughly translated as static cycling with weights, so she turned to me with a look of horror on her face and said: "Like strongman competitions?" I fear she was having visions of me pulling a bus with ropes tied over my shoulders!
We were late arriving at the hotel and were given 25 minutes to get ready – no mean feat.
But I just made it and was soon on to the coach to dinner, which this evening was hosted by the Shanghai Expo Group.
Next up was a night trip along the Shanghai river. It was amazing to see the city at night.
SATURDAY: We were up at 4am to travel to the China Expo 2010. It brings together different cultures and each country that takes part has a pavilion full of info about that nation.
The UK’s building was utterly spectacular, a huge spherical building with spikes. Then we travelled on our colourful open topped floats to the China exhibit, which is now going to be a permanent feature in the area as a museum.
It was incredible as we watched some Chinese girls dancing over wooden beams. A couple of girls got to try, but I’m not exactly known for being nimble on my feet so I thought it best to stay away from anything that was likely to make me humiliate myself! Black eyes would not go with my evening dresses. 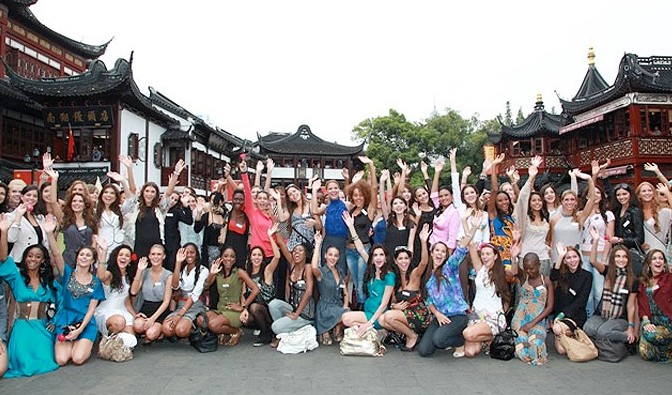 Group photo … the Miss World contestants in Shanghai
We travelled back to the hotel for a cocktail reception and charity dinner. I donated a silver quaich for the auction and it sold for thousands of pounds – in total the evening raised 2.5million yen (?90,000) I went to sleep feeling happy about the success of the evening – it’s humbling knowing the good things Miss World does for the less fortunate, and it’s something I’m going to get more involved with in the future.
SUNDAY: Last day in Shanghai today . We made a short trip to a neighbouring hotel for a Culture Forum, where ten contestants had been asked to speak regarding multiculturalism in their country.
The best by far was Miss South Africa – and I’m not biased because she is my roommate! – as she was short and succinct.
We then travelled to Yu Garden for lunch – the crowds outside our buses were crazy. We stopped in a very busy Shanghai street to walk to the restaurant and the crowds seemed to multiply around us. It was quite scary and the police formed a human barrier along the street so we were able to walk freely to the restaurant.
China dolls … contestants have a ball at a glitzy dinner in Sanya
Miss World We were loaded back on to our coaches after lunch and made our journey to the airport to head to the tropical island of Sanya for the remainder of the competition.
MONDAY: I got a long lie this morning – din’t have to get up until 9am. We left the hotel after breakfast to head to Sanya City for the Sanya Cycling Race and the Miss World City Parade.
We arrived a little early so whilst waiting on our events starting, organiser Julia Morley came to chat to us. Afterwards I felt really motivated and keen to give my all in this competition.
The beach filming begins tomorrow, so I was out with the tanning mitt this evening hoping to rival some of the South American girls with my tanning efforts. Game on, ladies!
TUESDAY: We filmed our beach profiles by the pool. Afterwards we had to do a group bikini shoot and we all went into the pool and proceeded to playfight and splash each other. 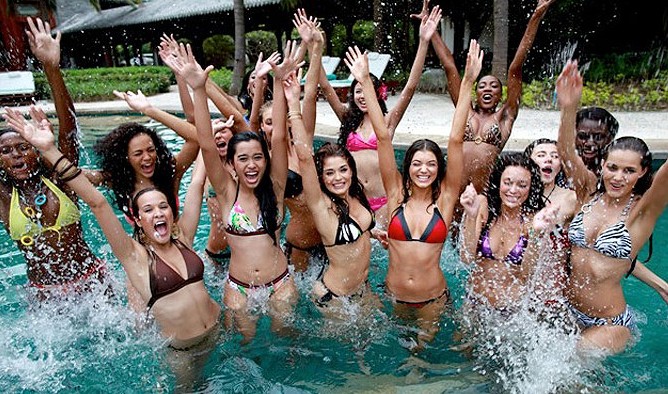 Splashing time … the girls have fun in the pool
Miss World We also began rehearsals for the final show today – all 120 of us – before an ultra-glam dinner at a neighbouring hotel, so the back-combing began!
WEDNESDAY: I had a free morning so headed down to the pool for a swim. I stayed out the sun as much as possible as I didn’t fancy the lobster look for the Beach Beauty event, which kicked off this evening.
It was the first of the fast-tracks so everyone was rather nervous and the atmosphere was tense as we waited to see the judges. 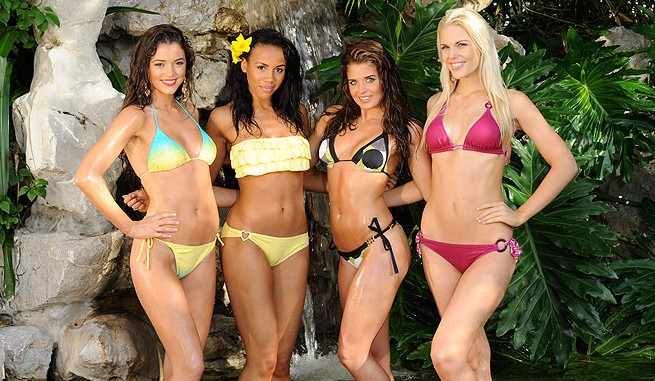 Magic Kingdom … UK hopefuls (l-r) Miss Scotland, Miss Northern Ireland, Miss Wales and Miss England
Harry Page There were so many hot bods here, they look as though they live in the gym. Fingers crossed I make it through.
THURSDAY: I made the Top 40 for the Beach Beauty event! There was a second round this evening where the judges whittled it down to the finalists.
The girls in this round were in amazing shape so I won’t be distraught if I don’t make it through tomorrow as there was tough competition. I was super-cheerful in my audition so hopefully that, and tensing my stomach muscles, has been enough to get me to the final.
Either way, I’m really happy to have made it this far.
SOURCE: thesun.co.uk
Editorial Message
This site contains materials from other clearly stated media sources for the purpose of discussion stimulation and content enrichment among our members only.
whatsonsanya.com does not necessarily endorse their views or the accuracy of their content. For copyright infringement issues please contact editor@whatsonsanya.com