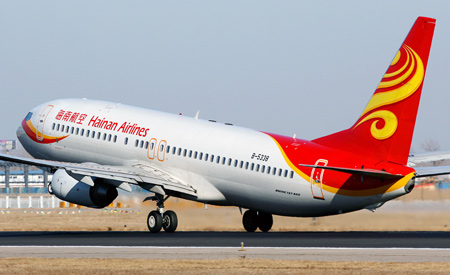 Hainan Airlines is China’s fourth-largest carrier
Soaring demand and fewer discounts have secured the profits of the nation’s major airlines in the first six months, with China’s aviation industry expected to stay well in the black for the rest of the year, said analysts.
Hainan Airlines Co Ltd, China’s fourth-largest carrier, said last Friday in a statement filed with the Shanghai Stock Exchange that its net profit for the first half may soar 100 percent from the same period last year. It attributed the improved performance to rising passenger volume and higher operating efficiency.

China Southern Airlines Co Ltd said in a statement to the Shanghai Stock Exchange on Thursday that its net profit in the first half is expected to skyrocket 5,000 percent from the same period last year.

"Zooming travel demand in the first half and a record low performance during the same period last year will combine to make China Southern’s profit jump 50-fold," said the Guangzhou-based carrier.

China Southern reported a net profit of 38 million yuan in the first half of 2009, a drop of 95.3 percent over the same period in the previous year.

In the first half, domestic carriers’ passenger volume increased 18.6 percent year-on-year, while international passenger throughput rose 36 percent during the same period, according to the latest figures released by the Civil Aviation Administration of China (CAAC) on July 20.

Li Jun, an analyst from Huatai United Securities, estimated in a report that the domestic aviation industry will make a combined pre-tax profit of around 5 billion yuan in the first half of this year, and this figure will reach a record of nearly 10 billion yuan in the third quarter.

China Eastern Airlines Co Ltd, the nation’s second-largest carrier by fleet size, expects its net profit to increase more than 50 percent in the first half year-on-year.

China Eastern is going to release its half-year report in late August, and Luo Zhuping, board secretary of the Shanghai-based airline, said its results will be encouraging.

"We are now in a key year for the aviation industry," said Luo. "After a series of mergers and acquisitions in the nation’s aviation industry, there are fewer but stronger airlines operating across the nation, which guarantees our business volume and quality at the same time," he added.

Luo added that yuan appreciation will reduce the carrier’s debts as they are calculated in US dollars. "This will be another piece of good news for carriers," said Luo.

The first six months is not a traditional peak season for the aviation industry, and the sector’s solid performance will improve further in the second half of the year, said Li Lei, an industrial analyst from Citic China Securities.

"A number of factors, including the economic revival, the ongoing Shanghai Expo and summer holidays will push up ticket prices while seat-kilometer utilization will hit a new high," said Li.