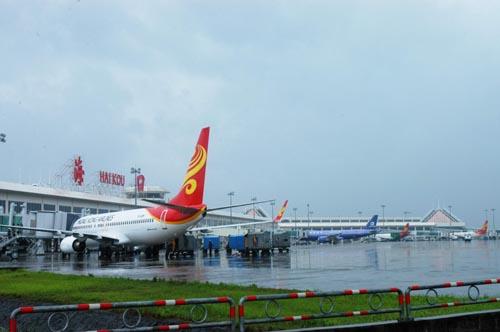 Chanthu, the third typhoon of the season, made landfall at the coastal area in south China' s Guangdong Province Thursday noon, it went ashore at Wuchuan City at around 1:45 p.m.,

At least 26 flights in and out of Haikou Meilan International Airport in Haikou, capital of the island province of Hainan, which is just one strait away from Guangdong, had been canceled Thursday.

Chanthu delayed 30 flights at the Baiyun International Airport in Guangzhou. However, few passengers have been stranded at the airport, according to Baiyun airport officials.

The airport also provided free food and made hotel reservations for passengers whose flights were delayed for more than two hours.

Two people were killed and the lives of more than one million people were disrupted. Two pedestrians were killed by walls that blew over in strong gales accompanying Chanthu afteraccording to officials at the provincial flood control headquarters.

No casualties have been reported in Hainan.

Meteorologists in Guangdong forecast that in the next 24 hours Chanthu would continue traveling northwestward at a speed of 15-20 km per hour while gradually weakening.