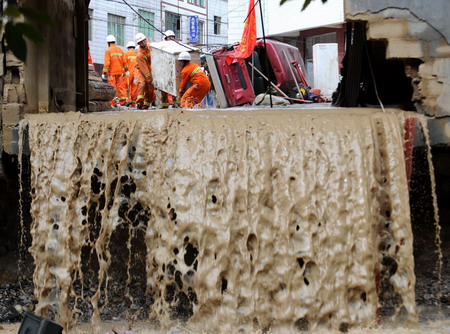 Rescuers clear debris on the street on Wednesday after rainstorms hit
Xiaohe township in Qiaojia county, Yunnan province. A dozen people
were killed and about  30 remain missing after the flooding.
A massive flooding similar to the one in 1998 that killed thousands of people is likely to occur this year, if downpours continue to batter the upper and middle reaches of the Yangtze River, a flood-control official has warned.

"Although the current situation along the Yangtze River has yet to reach the danger level, it is definitely at a crucial point," Wang Jingquan, director of the flood control and drought relief office affiliated to the Yangtze River Water Resources Committee, told China Daily on Wednesday.

Monitoring results from the committee suggested that as of Wednesday, the water level of all sections of the Yangtze River had exceeded the annual average level for mid-July, Wang said.

Since June 7, water levels of the Jiujiang section and Boyang Lake along the Yangtze River have gone beyond the alert level twice. The water level at the Three Gorges Dam reached 150 meters, 5 meters higher than the alert level during flood season.

"We are definitely facing great challenges in flood control along the Yangtze River because heavy rainfalls usually hit the river valley in July and August," Wang said. 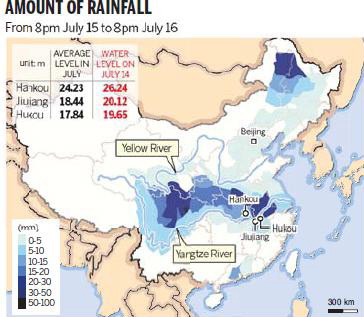 Source: China Meteorological Administration;
The Yangtze River Water Resources Committee.
The three massive floods in the Yangtze River valley in 1975, 1983 and 1998 all occurred in July and August, he said.

"There will be no room for optimism as the incoming Typhoon Conson will add to the grave situation in flood control," Wang said.

"If heavy rain hits the upper reaches of the Yangtze River, coupled with the continuous rainfall in the middle and lower reaches, severe flooding similar to that in 1998 will occur."

In the summer of 1998, China experienced its worst flooding in parts of the Yangtze River basin, which killed 4,150 people and forced 18.4 million to be relocated. Economic losses totaled 255 billion yuan ($37 billion).

The State Flood Control and Drought Relief Headquarters also forecast that a recurrence of the massive flooding in 1998 is possible because of similar weather conditions this year.

The China Meteorological Administration forecast on Wednesday that the rain belt will move to regions along the Huaihe River from Friday to Monday.

Heavy rains will hit Sichuan province and Chongqing upstream of the Yangtze River this week, while rainstorms will batter Hainan and Guangdong provinces under the influence of Conson after Thursday, it said.

Flooding and landslides triggered by heavy rains have crested riverbanks, broken dikes and cut off power and water supplies in parts of the badly hit areas in the south, leaving tens of thousands of people homeless.

Flash floods forced more than 30,000 people to evacuate in Jiangxi province on Wednesday morning and caused water levels at three reservoirs in Poyang county to spill over.

The local meteorological bureau issued a top alert for rainstorms on Wednesday.

Landslides triggered by heavy rains in Yunnan, Sichuan and Hunan provinces left at least 41 people dead and nearly 40 others missing earlier this week.

In Qiaojia county, Yunnan, one of the worst-hit areas, landslides triggered by torrents on Tuesday morning killed 17 people and left 28 missing as of Wednesday, China National Radio reported on Wednesday.

The recent downpours have claimed 118 lives, left 47 missing and displaced more than 1 million people in 11 provinces and regions in the central and southern parts of China, with direct economic losses reaching 360 million yuan from July 1 to July 14, latest statistics from the Ministry of Civil Affairs showed.

President Hu Jintao and Premier Wen Jiabao have ordered relevant ministries and local governments to ensure the safety of the public and minimize property losses as the country has entered the flood season.

Hu and Wen stressed that people residing in areas under the threat of floods and typhoons must be relocated to safety in a timely manner.

SOURCE: english.eastday.com
Editorial Message
This site contains materials from other clearly stated media sources for the purpose of discussion stimulation and content enrichment among our members only.
whatsonsanya.com does not necessarily endorse their views or the accuracy of their content. For copyright infringement issues please contact editor@whatsonsanya.com