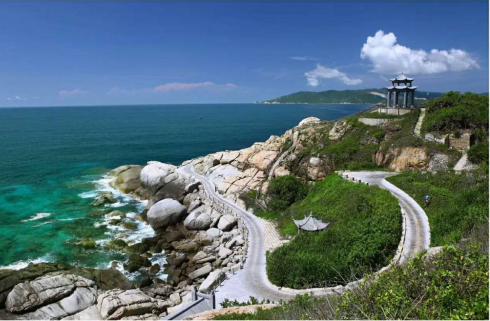 Not long ago, though, construction, pollution, trawling fishermen and a dependence on sales of coral handicrafts endangered the coastline ecology of Hainan province and the island community’s livelihood.

Conservation campaigns by residents, businesses and the local government successfully helped manage the many threats, restore the coral reefs and further establish tourism as an eco-friendly employer and attraction for visitors.

West Island, about 14 km from Sanya by ferry, is the second-largest island in Hainan province. It covers an area of 2.8 square kilometers, is home to more than 4,000 permanent residents and has been inhabited for more than 400 years.

Tourism on the island has been operated by Sanya West Island Tourism Development Co since 2001 and has seen rapid growth since then, including the development of eco-friendly tourism activities that attract thousands of tourists annually.

Diving is one of the most popular activities, offering colorful coral reefs, tropical fish and undersea creatures. The island is one of three sections of Sanya National Coral Reef Nature Reserve, an 85 sq km reserve established in 1990 that also includes Yalong Bay and Luhuitou Peninsula-Yulin Bay. The reserve mainly protects the coral reef ecosystem, with its 110 species, and marine biodiversity.

The coral reef coverage around West Island has increased from a little more than 17 per cent in 2005 to nearly 19 per cent today.

“Tourism developed on West Island has enabled local residents who used to be fishermen to change their professions. More than 800 residents have become tourism workers. Some of them make a living by running small businesses, such as selling food, sea shells, coconut handicrafts or swimwear to tourists. Some of them became employees of the tourism company,” said Zeng Yi, who lives on the island and works at the coral reef supervision station.

Zeng and his colleagues are ever vigilant in their efforts to protect the reef. They patrol the waters, drive fishing boats from anchoring in prohibited areas and prevent fishermen from trawling. They’ve also seen residents change their relationship with the sea.

“The residents’ environmental and ecological awareness have been improved,” Zeng said.

In the 1960s, coral reef coverage in Sanya waters reached 80 per cent. It fell sharply in the 1980s and 1990s, as neither government nor residents had a keen awareness of the value of environmental protection.

Houses on the island were built with coral, residents excavated coral reefs to make handicrafts to sell to tourists and fishing damaged the coral reefs.

“Large marine engineering construction is a deadly threat for the coral reefs in the reserve area. In addition to that, land-based pollution and tourism, such as improper diving activities, are the main threats,” said Fu Jie, director of the reserve’s administration.

The provincial government has introduced laws to protect the coral, and enhanced punishments for violators are expected. Currently, the most severe punishment for damage to the coral reef is a 100,000 yuan fine.

Next news: Raffles Hainan presents Dinner in the Sky