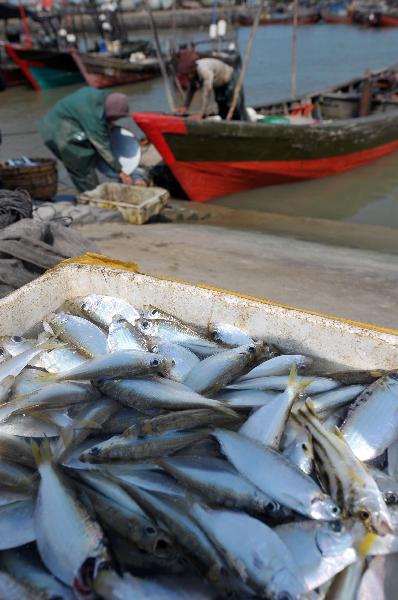 Fishermen collect fishes before the fishing ban at a harbor in a village
in Haikou, south China’s Hainan Province, May 16, 2010.
A 2.5-month-long ban on fishing imposed by the Chinese Ministry of Agriculture in the South China Sea took effect on May 16, most fishing activities in the banned area of the South China Sea will be stopped in the next two and half months.
Trawlers and gill netting are banned in waters north of 12 degrees of north latitude, including the Beibu Gulf, said Lin Qisong, head of aquatic products bureau of Beihai, a port city in south China’s Guangxi Zhuang Autonomous Region.

Affected by the ban are more than 20,000 fishing boats registered in Guangxi, Guangdong and Hainan Provinces, along with boats from Macao and Hong Kong, as well as some boats with permits to fish in Sino-Vietnam demarcated waters in the Beibu Gulf, according the Chinese Agricultural Ministry’s Administration for Fishing Affairs and Fishing Ports on South China Sea.

It’s the 12th time a ban on fishing in the area has been imposed in the past seven years since 1999. Lin says the ban is beneficial as catches jump more than 40 percent after the ban.

Dong Xiaogang, of the Guangxi Autonomous Regional Bureau of Aquatic Products and Animal Husbandry, said that fishermen will be provided with training courses during the ban period to help them pick up practical skills or learn to read and write. Other areas might stage cultural performances and sports events to entertain the fishermen.