Rubber Duck set to make a splash in Sanya 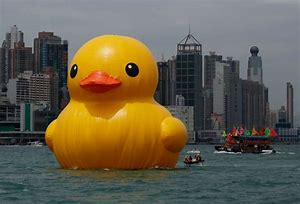 The rubber duck made quite a splash last year in the world, and this year it is going on a new journey in China.

Taiwan company Concept, Culture, Creative recently signed an agreement with Florentijn Hofman,artist and designer of the Rubber Duck, to exhibit it in nine mainland cities including Qingdao, Zhengzhou, Shanghai, Hangzhou and Sanya, starting from June 1 in Hangzhou, Zhejiang province.

The Rubber Duck will stay in Hongzhou for a month, before it takes off to Qingdao, Shandong province, and later Guiyang, Guizhou province.

The first Rubber Duck was born in 2007 in the Netherlands, and the creator Hofman started his journey with the duck from Saint-Nazaire, France, and so far the duck has traveled 23 cities in 11 countries.