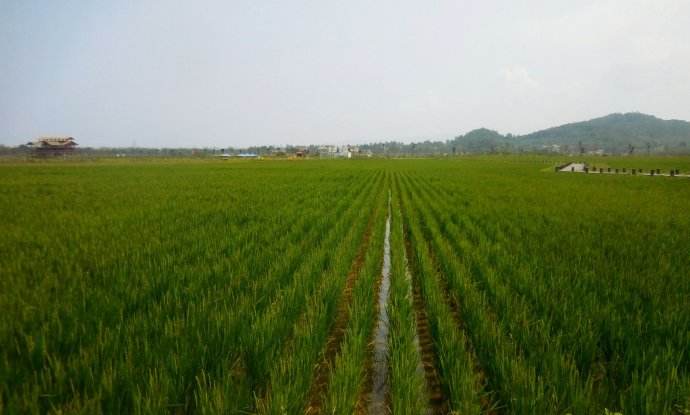 The yield of China's new hybrid rice breed has topped 1,000 kg per mu (0.067 hectare), with the country set to break the world record in rice output through large-scale planting, according to a report released on Thursday.

After supervised harvesting and weighing 13 days ago, rice breed, Longliangyou 1813, produced a harvest of 937.9 kg per mu in the country's largest southern breeding base in Sanya, Hainan Province.

Theoretically, output reached 1081.8 kg per mu as 0.1 mu of rice paddy suffered disease without any output, according to rice researchers in China.

"If the diseased rice was in normal condition, the yield would have topped 1,000 kg per mu, setting a new world record," said Guo Shoubin, chief breeding instructor of the new breed's development team.

The record yield is the achievement of the fourth phase of China's hybrid rice development program and is made possible by a new high-yield breed, advanced cultivation technology and nanotechnology-supported fertilizer, Guo said.

"Given the situation, the goal of achieving a new super rice strain with an expected yield of 1,000 kg per mu will be achieved before 2015," said Yuan Longping, "father of hybrid rice" and leader of the new breed's development team.

The new breed will be planted in large-scale breeding bases in other provinces such as Hunan to test its productivity later this year and is expected to achieve a higher yield as other regions enjoy more favorable environment for rice growth than Hainan, Yuan said.

"The new breed is pest-resistant and highly productive, and we also designed a specific cultivation pattern for the breed to grow more quickly," Liao said.

Meanwhile, nanotechnology-based fertilizer is being used for the first time in breeding hybrid rice. Xue Helun, inventor of the fertilizer, said it can activate microbes in the soil, not only fertilizing the breed, but also the soil itself.

Nanotechnology-supported fertilizer has been used in cultivating corn and water melons, all highly productive. It can restore the soil's fertility and transform heavy metals into unharmful elements, said Chen Shuyu, an agricultural expert with an academy on development and economics in Sichuan Province.

"Given another five years, a yield of 16 tonnes per hectare is achievable," Yuan said.

Most farmers are risk-sensitive and quite conservative about trying new breeds, and there are also vested interests among market players which fear the promotion of new breeds may lead to exclusive competition, Xue said.

It is important that the country supports pioneering farmers running large-scale farmland to first experiment with the new breed, while extensive training for farmers is also necessary to facilitate promotion, Guo said.

"There is great potential in advancing the technology to boost the output of rice," Yuan said, "with favorable agricultural policies, China can survive the grain security crisis."