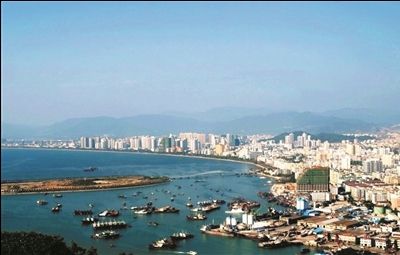 Local authorities in Sanya, a popular tourist destination in South China's Hainan Province, will ban the construction of homes smaller than 80 square meters, the Xinhua News Agency reported recently, citing He Dazhe, an official from the city's urban planning bureau.

Authorities in Sanya have described this move as an attempt to upgrade the city's property stocks. Over recent years, some 85 percent of all home sales in Sanya have been made with nonlocal buyers looking for investment, vacation or retirement properties. The problem though is that smaller, less expensive homes are typically the first to get snapped up in this holiday hot spot, and many local buyers are now being priced out of the market thanks to the external demand. Additionally, municipal officials claim that the explosion in sales to nonlocals is straining the city's infrastructure and social services.

Despite these problems, the local government's planned intervention has sparked a debate within the public about whether authorities should interfere directly in local housing markets. Will Sanya's initiatives really put the city's real estate market on the path toward healthy development? Such a question deserves to be raised since the central government pledged to let the market play a "decisive role" in the allocation of capital and other resources in documents released following the Third Plenary Session of the 18th Communist Party of China Central Committee held in November.

In all actuality, Sanya's ban on smaller home construction could undermine the market-oriented discipline that central leaders are now working to cultivate. The truth is that most nonlocals looking for holiday or investment homes in Sanya don't want multi-million yuan luxury apartments; they want smaller properties that are relatively affordable and easy to maintain. Local developers have had little trouble identifying this demand, and most have funneled substantial amounts of capital into the construction of homes with less than 70 square meters of floor space. Still though, local media reports say that, based on current demand, it would take roughly two years to digest Sanya's small home inventories; a relatively short time frame compared to many larger cities, where an excess of speculative investment has created nearly a decade's worth of unsold properties.

The long-term consequences of the government's plan deserve careful reflection. Over the short term, many potential buyers will likely avoid Sanya once the ban kicks in. Yet, property developers will have to spend more time and money promoting their pricier homes to potential buyers. And if the marketing costs become too excessive, then developers may have little choice but to pass these expenses onto the market.

Let's not forget as well that Sanya isn't the only place in Hainan which can boast a comfortable tropical climate or a beautiful natural environment. Buyers in search of a vacation home or a sunny spot to retire could just head to nearby Lingshui Li Autonomous County and Ledong Li Autonomous County, both of which would likely embrace an influx of outside cash. Whether officials in Sanya are deliberately trying to orchestrate such a diversion though remains unclear.

Sanya would also not be the first city to introduce forceful housing market interventions. Wenchang, another tourist area in Hainan, reportedly tried and failed recently to ban the construction of new homes smaller than 100 square meters. And Lian Su, the mayor of Ordos, Inner Mongolia Autonomous Region, said during a group discussion at the annual session of the 12th National People's Congress that a three-year ban on new housing construction would be introduced in the city, where more than 40,000 unsold apartments now sit empty.

Sanya is one of several cities in China now grappling with a problematic housing market. But it remains to be seen whether direct administrative interferences can ultimately support a healthy market climate. Perhaps instead of outright bans or policy prohibitions, officials in Sanya can roll out measures to steer the market in the direction they want. For instance, they could offer financial incentives or funding support to defray the costs associated with larger properties. Doing so could help the government reach its desired goal while still giving the market a voice in the city's housing sector.