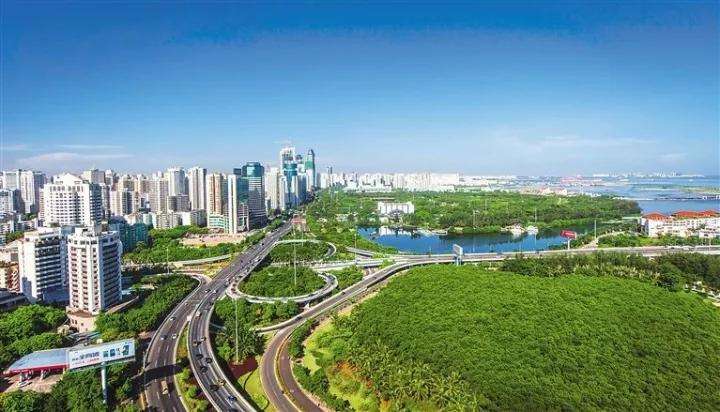 Haikou, the capital of South China’s Hainan province, has participated in several international economic, technological and cultural exchanges in the past few years.

The city is looking to enhance its influence and cooperation with other parts of the world through a series of international events.

The meetings brought together nearly 800 government officials and representatives of international organizations from more than 60 countries.

The meetings involved record numbers of nations and mayors of foreign cities, and helped with Haikou’s aspiration to open up and contributed to Hainan’s efforts to become an international tourism island.

More than 200 representatives from 43 cities in 14 Asian nations, including 26 mayors and vice-mayors, gathered in Haikou for the A.M.F. General Assembly on Nov. 25.

Haikou was chosen as the host city for this year’s general assembly after becoming a member of the A.M.F. in November 2013.

“The meeting was a good chance for Haikou to enhance communication and exchanges with Asian cities and the whole world,” said Haikou Mayor Ni Qiang. He said the forum could boost future reforms and development of Asian cities. This year’s meeting, themed Innovative Economies: The Roles of Asian Cities and Local Governments, was the first time the A.M.F. was hosted by a Chinese city. The event has been held every two years since 2008. In 2007 Mohammad Bagher Ghalibaf, mayor of Teheran, the capital of Iran, started the forum, which now includes 67 member cities. It endeavors to promote traditional Asian culture and values, and serves as an important platform to boost communication and exchanges among Asian cities.

The general assembly is the organization’s most important gathering. Previous forums were held in Teheran, Istanbul and Bangkok.

“The 21st century is the century of Asia,” Ghalibaf said. “It is very necessary to expand cooperation between cities. Good cooperation is the foundation of shared economic growth and cultural prosperity.”

According to the forum’s regulation, Ni starts to serve as the chairman on duty for two years from November.

During the meeting, issues such as economic reforms and innovation in the context of new international environment, sustainable development and common challenges were discussed. A declaration under the name of the host city Haikou was released at the closing ceremony. It urged member cities to enhance local governance institutions and promote innovative economic cooperation among Asian cities to reinforce sustainable development.

It also encouraged members to further engage in bilateral and multilateral cooperation, as well as to share best practices and competitive innovations in urban management.

The meeting brought about cooperation projects among member cities including Haikou.

Enterprises in Haikou and Bangkok agreed on a plan called the China Thailand Cultural Tourist Resort, which will involve a 6 billion yuan ($977 million) investment. The project is due to begin early next year. The four-square-kilometer resort is expected to become an important destination for leisure tourism in suburban Haikou and is expected to boost construction and economic growth in surrounding areas.

According to Sukhumbhand Paribatra, governor of Bangkok, there are many similarities between Bangkok and Haikou, including the climate and geographic proximity.

“I am glad that many cooperation programs have further linked the two cities,” said Paribatra, who was president of the forum before Ni.

“We will celebrate the 40th anniversary of the establishment of diplomatic relations between Thailand and China while Bangkok and Haikou can take the opportunity to build a more intimate relationship,” Paribatra said.

“Cities capable of preserving their indigenous culture of different aspects will certainly succeed in attracting more visitors. This important point seems to have been taken into consideration by Haikou’s top urban managers,” said Mohammad Khodadadi, Secretary General of the A.M.F. He has visited the city twice since 2013.

Haikou has promising prospects of turning into a global hot spot and helping Hainan become a globally recognized tourism island before 2020, Khodadadi added.

The meeting gathered about 500 local and regional government representatives as well as partners from the international community and development agencies.

It focused on priorities for world organizations and included political debates on crucial issues on the international agenda that impact local authorities directly.

U.C.L.G., which was founded in 2004, has more than 1,000 member cities and involves 112 national-level governmental associations worldwide. Haikou was the third Chinese city to host its world council, after Beijing and Guangzhou.

The First Haikou Sister City Mayors’ Summit provided a platform for Haikou to demonstrate its openness and carry out all-round exchanges and cooperation with its partner cities.

During the past three decades, Haikou established twin-city relations with 28 cities in 25 countries worldwide. Based on the relations, Haikou has made exchanges with the other cities in education, medical care, culture, economy and urban management.

“The sister city relations have linked Haikou with the world. It’s a platform for us to exchange with people of different cultural backgrounds and learn from each other,” Ni said.

At the meeting, Ni proposed a new type of sister city relationship, which would include new fields of cooperation such as environmental protection, tourism and trade, more citizen participation and frequent exchanges between entrepreneurs from both sides.