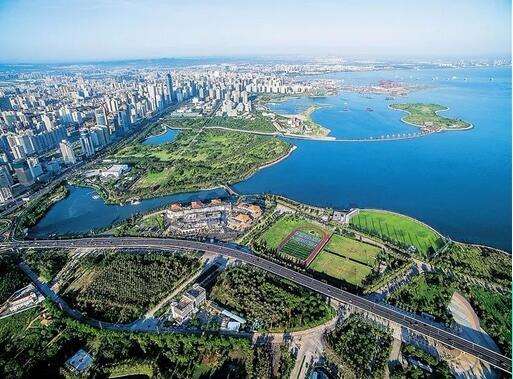 For people living in highly polluted regions, the advertisement is alluring. Its appeal is strengthened by a depiction of an iconic coconut tree and the blue sky above.

The city government of Haikou has recently made its objective to help Haikou become an “eco-city” that is most suitable for living and traveling.

A range of policy measures have come out to control air pollution, drinking water quality, and the development and management of the city’s green space.

Efforts have paid off. In 2013, its air quality ranked first among the nation’s 74 cities. According to a report released this year on competitiveness, Haikou ranks third in terms of living conditions.

The city’s excellent ecological and living environment not only attracts tourists, but also large international events.

The Mission Hills World Celebrity Pro-Am Golf Competition wrapped up in October. Twenty-four professional golf players and 24 international sports and cultural celebrities including Morgan Freeman, Nicole Kidman and Yao Ming participated, as did more than 400 media outlets from around the world.

The international kitesurf competition, or PKRA World Tour, kicked off on Nov. 1. It is the city’s third time to host the event.

Ni Qiang, the city’s mayor, said that the influx of global events will help promote the city to the world and improve its position in the province’s plan to develop an international tourism island.

Next news: Highlights in Haikou during 2014 Hainan Carnival