Cashless casino bar ordered to be closed in Sanya 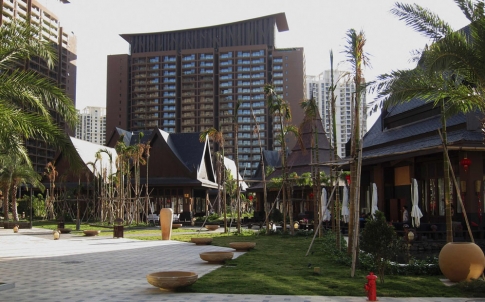 Mangrove Tree Resort World in Sanya Bay
The mayor of Sanya, a seaside resort city in Hainan, ordered the closure – not the first – of a cashless bar at a luxury hotel in the city on Saturday night, hours after CCTV identified it as an "underground casino".

CCTV’s Topics in Focus programme claimed that hotel guests could gamble without cash at the so-called entertainment bar at Mangrove Tree Resort World in Sanya Bay, one of the nation’s largest resorts and owned by one of its richest men.

It was not the first time that authorities had tried to close the bar, which is owned by Zhang Baoquan , president of the Antaeus Group and ranked by the 2012 Forbes China Rich List as the 265th wealthiest mainlander, worth of US$605 million.

Guests and other tourists had to pay at least 1,000 yuan (HK$1,270) for a ticket to enter the bar, where they would be given chips worth between 200 and 3,000 yuan, according to how much they paid outside.

Chips could be redeemed for "Mangrove points" that in turn could pay for accommodation and other goods and services available at the resort, such as luxury watches and bags, or even works of art and antique furniture worth millions.

Within hours of the programme airing on Saturday night, Sanya Mayor Wang Yong called for stern punishment for the hotel and the bar, People.com.cn reported.

During the meeting, however, Wang was also told by local police that they had raided the establishment on January 16, seized gambling equipment and closed the bar, the news portal said.

Authorities did not mention how the bar escaped punishment and returned to business so quickly.

Zhang claimed at the time that the bar was operating on a trial basis with official blessing.

A saleswoman at the hotel, who refused to give her name, said yesterday that the bar would reopen soon. "The developer is very powerful and will take proper care of the issue," she said.