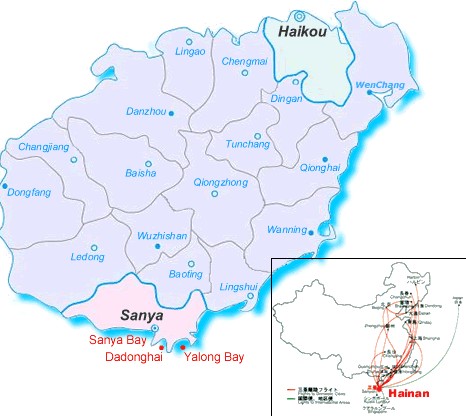 Regional economic integration that creates synergy among neighboring cities has become a trendy economic development strategy in China. In Hainan Province’s tourism industry, this concept is turning into realization.
On October 26th 2013, a special conference took place in the Sanya Hai Tang Wan Westin Hotel. Sanya, the southernmost city of Hainan Province and China, was joined by six other cities in the region to promote their tourism resources to fifty-nine travel agents and thirty-four media representatives from around China. This day also marked the official establishment of the “Big Sanya Tourism Circle,” which promotes the seven cities sharing tourism resources and collaborating with each other.

This new initiative will integrate the resources of different cities and achieve a win-win situation for all the cities. According to Sanya’s vice mayor Xu Zhenling, the city is going to adopt relevant policies and regulations and co-develop tourism products with other cities. Sanya plans on fostering a tourist service chain that links dining, lodging, transportation, shopping, and entertainment services.

The inception of the “Big Sanya Tourism Circle” is a reflection of Hainan Province’s economic development policy. Since the Chinese National Congress established the national economic development strategy in 2009 to turn Hainan Province into an international tourism island, the region has experienced an investment wave. Real estate investment and tourism started booming in the southern part of Hainan Province, including Sanya and the nearby cities. The homeowners who seek vacation resorts in the region push the development of the “Big Sanya Tourism Circle.”

As the core of “Big Sanya Tourism Circle,” Sanya received more than eleven million overnight tourists in 2012. Some people say the nearby cities joined the circle in order to benefit from the influence of Sanya; yet Sanya’s vice mayor Xu Zhenling told the reporters that Sanya and the other nearby cities are not in a giver-receiver relationship, instead, Sanya will gain more from this collaboration. Xu says that many of Sanya’s tourists are frequent customers who are familiar with Sanya’s ocean views, and they are not going to stay for several days if the city does not offer new attractions. By developing the nearby cities’ tourism resources, Sanya is going to gain more tourist traffic. One of the reasons is that most tourists are going to take their flight and shop in Sanya no matter which city they go to. Another more important reason is that during the popular season, splitting some tourists to the nearby cities relieves Sanya’s city management and services pressure. In addition, the nearby cities have a diversity of tourism resources including rainforests, hot springs, rafting, hiking, and ethnic minorities culture tours, which complement Sanya’s ocean and beach theme.

To realize the vision of the “Big Sanya Tourism Circle,” the cities have several obstacles to overcome, which include:

•Transportation bottleneck. According to Sanya Tourism Association secretary Xie Xiangxiang, Sanya’s tourism vehicles cannot operate in other cities, which leads to an inconvenience in sending tourists to nearby city’s attractions in a combo tour;

• Integrated governance and policy. The cities are having difficulties in establishing an integrated regional plan and avoiding competition in the same niche;
•A lack of talent. According to Xie, Sanya has many luxury hotels with advanced hotel management experience, but the other cities lack this kind of talent, which impacts their management and marketing effort; and
•Gaps among different cities. The disparity in the policy, investment, infrastructure, and public services among different cities will require them to work closely with each other and offset the deficiencies.
SOURCE: globalsiteplans.com
Editorial Message
This site contains materials from other clearly stated media sources for the purpose of discussion stimulation and content enrichment among our members only.
whatsonsanya.com does not necessarily endorse their views or the accuracy of their content. For copyright infringement issues please contact editor@whatsonsanya.com