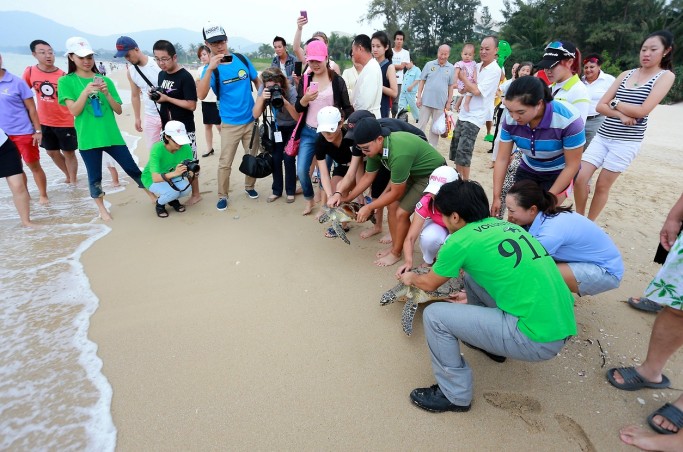 Stepping off the green for a worthy cause, world-class athletes such as Cassandra Kirkland and Qiao Chang Yu, currently participating in the Sanya Ladies Open at Yalong Bay Golf Club in Sanya, China, have lent star power to the sea turtle release event. Participants were given a sea turtle conservation presentation on the beach at Mangrove Tree Resort on tropical Hainan Island in an effort to raise awareness about the critically endangered Hawksbill sea turtle and the Green sea turtle, a project sponsored by Ocean Park Hong Kong Conservation Foundation.

Six months ago, the released Hawksbill turtle sustained an injury to her rear left flipper and bécame an amputee at the floating sea turtle hospital. The Hawksbill, however, has since been adopted by the Yalong Bay Golf Club and will be named after the winner of the golf tournament. The released Green sea turtle was appropriately named “3rd Life,” because this release marks her third swing at life. Two days ago, 3rd Life was inadvertently caught in fishing net bycatch by a fisherman, who then contacted Sea Turtles 911 upon observing the organization’s phone number on the turtle’s metal flipper tag. When ready to be released, sea turtles are given tags that will facilitate, in the future, turtle identification and monitoring. The tagging of sea turtles that are being returned to the ocean is an integral component in their overall quest for survival.

The marine turtles checked out of the floating sea turtle hospital in Hainan Province and returned to their natural habitat where they will once again be able to feast upon the natural green sea grass beds, sponges, and jellyfish. Green sea turtles and Hawksbill turtles help in maintaining healthy sea grass beds and coral reefs, which are disappearing from the planet at exponential rates, by eating predatory sponges and jellyfish that threaten coral reefs and fish stock. In removing prey such as sponges from the surface of the reef, the sea turtles act as natural landscapers, maintaining, and beautifying the coral reefs, while helping to provide improved access from which reef fish may feed. However, despite their environmental significance, sea turtles continue to face myriad threats. This is among the reasons why Sea Turtles 911 Founding Director Frederick Yeh and a host of volunteers work tirelessly to help raise sea turtle awareness. Yeh opened the educational presentation with an inspirational quote to the audience, by stating, “In the end, we will conserve only what we love. We will love only what we understand. We will understand only what we are taught,” while highlighting the fact that, when armed with even the most basic knowledge and environmental education, an entire species can be saved.

Adding to the importance of the sea turtle crisis, defending golf champion Cassandra Kirkland of France, stated, “It was really nice coming here, I didn’t realize how important turtles are for the environment so I learned a lot, and it’s pretty exciting.” LET’s Danielle Montgomery of England, in reference to the sea turtle awareness seminar, said, “There was a good seminar before we released the turtles and it makes you realize how important turtles are and how we need to protect them.” And, Germany’s LET rookie, Leigh Whittaker, succinctly captured the core idea behind the conservation efforts, saying, “We should always take care of our environment and what we leave for the next generation. Educating people on environmental issues is very important.” Champion Cassandra Kirkland, Qiao Chang Yu from the China LPGA, and LAGT’s Patcharajutar Kongkrapan, released the two turtles, who will be needing more luck at sea than the athletes will need on the golf course.

To learn more about Sea Turtles 911 and how you can help these beautiful, endangered animals, visit http://www.seaturtles911.org/.