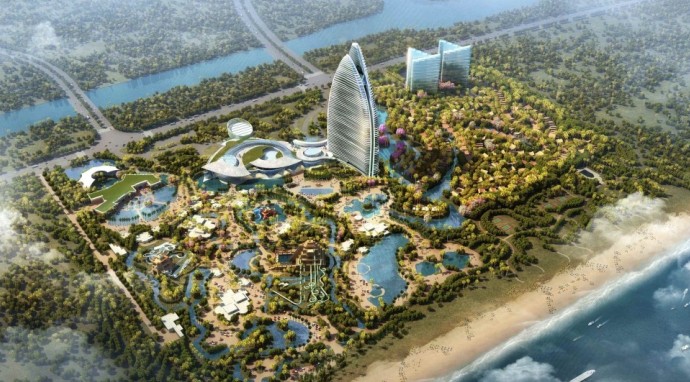 Based on the mythic lost civilisation, the 62-hectare Atlantis Sanya resort site is being designed by New York-based architectural firm Brennan Beer Gorman. Photo: Reuters
Shanghai-based conglomerate Fosun International says it will invest 100 billion yuan (HK$127 billion) in resorts and tourism-related businesses across China amid a rise in spending on tourism by mainlanders.

The Hong Kong-listed company, controlled by tycoon Guo Guangchang, also plans to team up with service providers to give mainlanders a taste of luxury during domestic tours.

Fosun is co-operating with Kerzner International to develop the Atlantis Sanya resort in the coastal city of Sanya, in Hainan province. It will spend 10 billion yuan to build the resort, which is expected to be operational in 2016.

"The projects will be powered by huge Chinese demand, while being developed with the introduction of globally renowned brands," Guo told a press conference yesterday. "We are investing in projects that will grow in line with the Chinese economy."

Kerzner International, owned by South African tycoon Sol Kerzner, known as the Sun City casino king, is the latest international player to make a foray into the mainland’s holiday island, following a clutch of big names including Starwood and InterContinental.

The Atlantis resort in Sanya will not feature a casino because they are banned on the mainland. However, there is speculation Sanya will be the place where Beijing may eventually allow casino gambling.

"China is the perfect location for our next Atlantis destination resort," Kerzner International chief executive Alan Leibman said. "This resort is set to quickly become a new landmark in China and will introduce the fun, interactive entertainment experiences at the heart of the Atlantis philosophy."

Fosun said it was also in talks with partners and local governments on several other big tourism projects, but declined to elaborate.

One of the mainland’s largest non-state-owned investment conglomerates, Fosun owns a stake in French holiday resort company Club Méditerranée, which has led to the development of two projects on the mainland. It is in the process of taking over Club Med, awaiting regulatory approval.

Guo said the mainland lacked quality service providers for tourists and the introduction of upmarket global brands such as Atlantis to China was aimed at catering to the tastes of wealthy mainlanders.

"There are some problems in tourism property development on the mainland," said Alva To, consulting head at DTZ North Asia. "Some developers only focus on selling residential units but fail to take full advantage of the natural tourism resources at the site."

Fosun was also looking at buying dozens of hospitals across the mainland, Guo said.