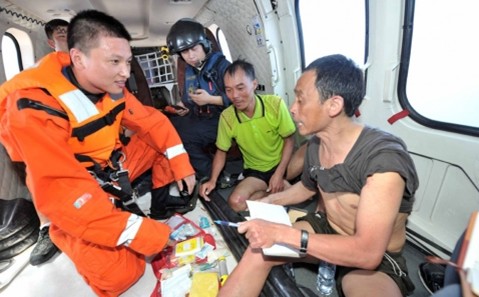 Rescuers talk with two fishermen after they were saved from the sinking ship in Hainan. Photo: Xinhua
Rescuers yesterday found another 12 fishermen shipwrecked in the South China Sea during Typhoon Wutip, with some describing how their boats were suddenly swallowed by huge waves.

The three sunken boats, together with another two that survived, including one with a Hong Kong owner, were all registered at the Guangdong port of Taishan , 140 kilometres southwest of Hong Kong. Mainland officials said that no Hong Kong crew were aboard any of the five boats.

The Beijing News said one survivor swam for seven hours to reach shore and reported to local maritime officials. The survivor said he jumped overboard when he saw a mountainous wave bearing down on the boat. He was among the first batch of fishermen saved on Monday.

Another fisherman, Li Changyou , said from his hospital bed in Sanya , Hainan , that the crew did not have enough time to properly don survival gear when the storm suddenly strengthened.

"I could only hold onto a lifejacket and drift more than two hours until a rescue ship found me and the others," Li said. "I have never seen such a strong typhoon in my 30 years at sea."

Li feared for the 58 missing fishermen as poor weather continued in the South China Sea.

Chen Dianqin, a search-and-rescue pilot, told The Beijing News that the hunt for survivors was hindered by huge seas and the glare from bright sunlight.

"We couldn’t find anything [near where the boats sank] as the waves had swept everything away," Chen said.

A ship from the People’s Liberation Army’s South Sea Fleet would arrive today to transport survivors to Sanya, Xinhua said.