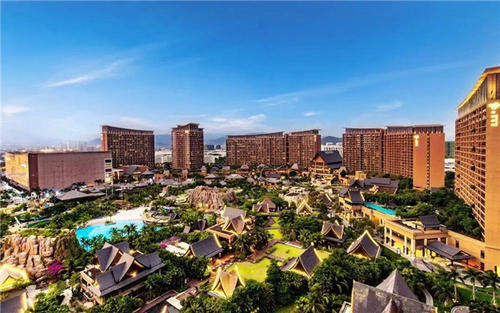 With tourism's on-going boost to China's economy, South China is looking to attract even greater numbers of travelers with more and more resorts targeting everyone from middle class families up to more luxurious accommodations.

Hollywood-based 5+design, a Gold Brick Award-winning US architectural firm, is out to win more contracts from China riding the trend.

"We have designed the largest resort in South China on Hainan Island – the Sanya Mangrove Tree Resort," 5+ design partner Michael Ellis told China Daily on Tuesday. "It's being hailed as an oasis within an oasis."

The Sanya Mangrove Tree Resort features six hotels with more than 5,000 rooms. Working on the project from 2007 to 2010, the firm was responsible for the master planning, concept design and schematic design for the massive resort.

Since the site is not located on the oceanfront, it needed something special to attract visitors.The six hotel towers are connected by a shopping and entertainment avenue that runs the entire length of the project compound.

The resort also has a water park and an expo hall for special events like film festivals.

"China has a huge market potential," Ellis said, "with very fast growth and vast changes due to modernization and the migration of many residents from the countryside and villages into big cities.

"We have been fortunate to work in China since before the 2008 crisis, so we were already established there with a number of projects underway when the financial crisis hit," he said.

Since then the company's business in China has increased, and the more of its projects that get built, the stronger the firm's reputation and position in the market grow, he said.

"The government is an important partner in many of the projects we do, and cooperation with them is critical for our clients and for us in China," he said.

The government often has to approve the design of a project before it can move forward, so they have frequently participated in presentations to various government planning and design authorities, he said.

Changes that come through the government sometimes require redesigns within tight schedules.

"But as a firm we are very flexible and quick-moving, so we have been able to adapt as necessary to ensure our Chinese client's interests are served," he said.

Since its founding eight years ago, 5+design has worked on more than 30 projects in China, including the completed Solana in Beijing, Luxehills in Chengdu, and Starry Street in Chongqing.

It also has 10 projects currently under construction in China that will all open within the next several years, as well as a number of new projects on the drawing board.

"We have led the way in building the future of commercial, retail and residential projects as displayed with our work that spans from the Royal Caribbean Cruise Line, the first upscale mall in Turkey, the first master-planned community in Egypt, the extension of the China World Trade Center and a host of others," Ellis added.

5+design is among an increasing number of US firms vying for the architecture contracts on the Chinese mainland in recent years.

ClarkManus,CEO ofHellerManusArchitects andpresidentoftheAmericanInstituteof Architects, told China Daily in an earlier interview that doing business in China is easier than in the US because the Chinesegovernment"seems determined to push construction growth".

Manus said China's market is a very dynamic and extremely refreshing place to work for US designers who have many ideas that are hard to realize in the US due to planning and zoning restrictions.


SOURCE: chinadaily
Editorial Message
This site contains materials from other clearly stated media sources for the purpose of discussion stimulation and content enrichment among our members only.

Next news: Qixianling to build itself into a brand health care tourism destination