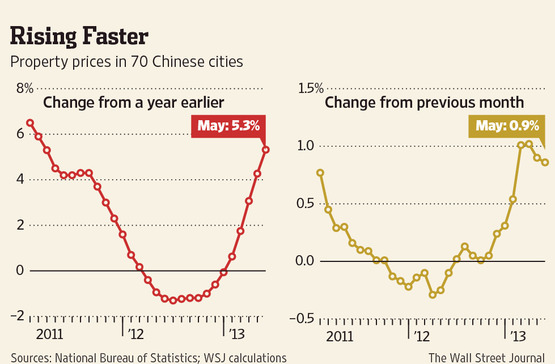 Housing prices in China’s biggest cities last month registered their highest annual growth rate in more than two years, which could increase pressure on a number of cities to better enforce the central government’s property-cooling measures.

May’s rise is the latest in a strong year for the property market despite efforts by the government to curb prices. While a robust real-estate market could contribute to growth as China’s economy slows, Beijing worries that pricier housing could lead to social unrest.

Average prices of newly built homes in China’s 70 major cities rose 5.3% in May compared with a year earlier, up from a 4.3% rise in April, according to calculations by The Wall Street Journal based on National Bureau of Statistics data. That is the highest reading since March 2011, when prices rose 5.3% as well. On a month-to-month basis, the increase in prices was 0.9%, the same as in April.

"There are still a relatively large number of cities showing price increases," the bureau said in a statement. "Property market adjustment policy still needs to be firmly implemented."

"What’s driving this is the expectation that prices are going to go up, which causes anxiety among people to transact quickly," said Michael Klibaner, head of research at Jones Lang LaSalle JLL -0.76%China. "It’s a self-fulfilling cycle."

China’s State Council, or cabinet, announced stricter property measures in March, including the requirement that local governments start collecting a 20% capital-gains tax on some second-home sales. But so far only the city of Beijing has implemented the tax.

"The poor implementation at the local-government level of the 20% capital-gains tax also reduced the impact of the March measures," Mr Chen added. If the momentum of price growth strengthens in coming months, local governments could be under pressure to increase their implementation efforts, Mr. Chen said.

Housing prices in major cities such as Beijing, Shanghai, Shenzhen, Guangzhou and Xiamen rose more than 10% year-on-year, which could mean that these cities will face greater pressure in the coming weeks from the central government to enforce housing-price curbs.

China’s three-year push to hold down property prices has had mixed results. While increases in housing prices have moderated from frothy rates in 2010, both prices and demand remain resilient, in part because of arbitrarily implemented policy measures.

Some city governments are stricter than others in cracking down on their property markets. Beijing’s city government, for example, early this month announced new controls on what developers can do with the proceeds of pre-sales of property. The new rules require developers to put the money in a monitored account and use it mainly for completing construction of the homes. That shift is aimed at developers that use pre-sales proceeds to pile into the land market to buy a plot for their next project, contributing to overheating.

"The rise in property prices has been driven by loose liquidity conditions in the first quarter. There has been a clear lead-lag relationship between [money supply] growth and property prices in China since 2009," said Nomura 8604.TO +0.96%economist Zhang Zhiwei.

SOURCE: wsj.com
Editorial Message
This site contains materials from other clearly stated media sources for the purpose of discussion stimulation and content enrichment among our members only.
whatsonsanya.com does not necessarily endorse their views or the accuracy of their content. For copyright infringement issues please contact editor@whatsonsanya.com