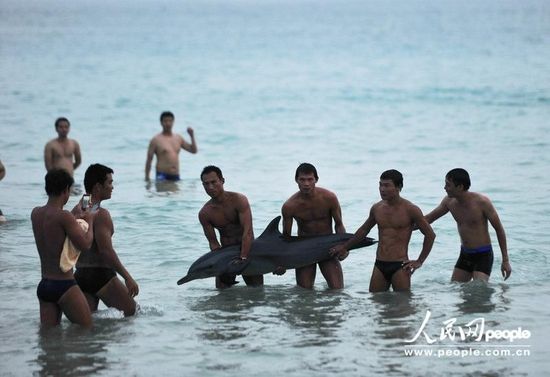 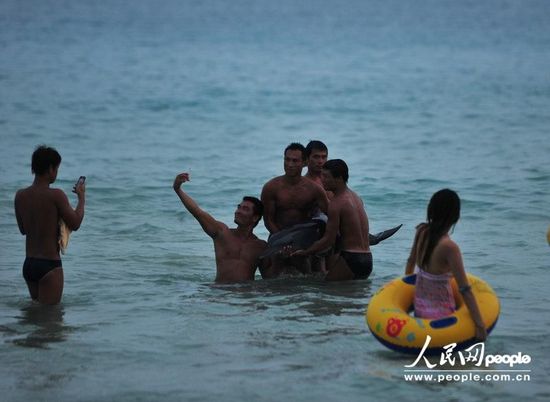 Tourists at a beach in Sanya City were accused of contributing to the death of a distressed dolphin by mistreating it, lifting it out of the water and posing with it in photographs that were posted to the Internet.

The dolphin was found near the shore in Dadonghai, a top resort in the southernmost Hainan Province, at around 6pm on Sunday by the group of tourists, the People’s Daily website reported yesterday.

The air-breathing mammal died around midnight at a local marine park due to excessive bleeding from the tail, reported Hainan’s news portal Hinews.cn. Experts said the dolphin might have collided with a fishing boat before it was stranded.

Instead of trying to help the distressed animal, a crowd gathered to line up for pictures. Several men lifted the dolphin, as long as a man is tall, above the water and one of them flexed his muscles for the camera. Online pictures do not show anyone trying to stop the abuse.

Experts recommend anyone finding a stranded or distressed dolphin should call for help while wetting it, shading it from sunlight and making sure not to let water or debris enter the blowhole on its head.

Photos showing the men lifting and posing with the dolphin went viral on Weibo.

Angry netizens condemned them for "disregarding life," "having no shame," and "ignorance for using a dolphin as a photography prop." Some netizens said it shows "Chinese tourists’ uncivilized habits."

Weeks after, a 14-year-old Chinese boy was reported to have inscribed his name on the wall of an ancient Egyptian temple during a family trip.

SOURCE: peopledaily
Editorial Message
This site contains materials from other clearly stated media sources for the purpose of discussion stimulation and content enrichment among our members only.
whatsonsanya.com does not necessarily endorse their views or the accuracy of their content. For copyright infringement issues please contact editor@whatsonsanya.com

Next news: China Railway to launch door-to-door services in Hainan & other provinces