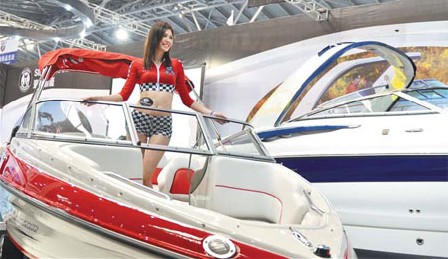 Yachts on show during China (Shanghai) International Yacht Show in April. The yacht market in China is expanding rapidly, and small yachts are popular. Provided to China Daily
The more mature the market is, the more popular smaller yachts will become. This is a rule of thumb in the yachting industry that is now taking shape in the Chinese market.

During the China (Shanghai) International Yacht Show in April, the number of smaller yachts shorter than 8 meters in length that were sold showed a 43 percent year-on-year increase.

Thibaut de Montyalon, director of the French sail and motor manufacturer Beneteau, says the four models of his company’s smaller yachts were the most featured this year.

Thomas Dammrich, president of the National Marine Manufacturers Association of the United States, said during a forum at the yacht show that owning a private yacht is not a way of showing off wealth in the United States. It is more of a recreational tool for middle class families and social echelons above them. As a mature yacht show, the rising number of smaller boats exhibited indicates that the industry in China is developing according to the general rules of the yachting industry.

Smooth Marine Equipment Ltd, based in Hong Kong, sold eight jet skis during the yacht show and received another 10 orders. The sales were up 10 percent year-on-year, according to May Y.M. Chan, director of the sales and marketing department of the company.

There is more than one reason. First, Chan says the jet skis are from Bombardier Recreational Products, which is a well-known brand that easily wins over buyers. Second, sales of smaller yachts easily outshine those of luxury boats during a slowing economy in which people have to be careful with their recreational budgets.

"It is also very important to notice that the rising middle class in China has prompted the shift. A growing number of them would like to lead a healthy lifestyle and smaller yachts can help them to realize that goal," she says.

The market in China, especially in the Yangtze River Delta region, where there is abundant water, is expanding so rapidly that Smooth Marine set up a Shanghai office in July last year.

"Because we are creating two more sub-dealers this year to bring the total number to 13, we hope sales revenue in China will go up by 15 percent," says Chan.

The recently issued Outline for National Tourism and Leisure will provide much room for the further development of the yachting industry in China, says Yang Xinfa, deputy secretary-general of the China Association of the National Shipbuilding Industry.

"Recreational yachting and equipment manufacturers are very likely to be the first industries to benefit from the policy," he says.

Lyu Anni, marketing director of BAFS Yacht Sales Co Shanghai, says sales of smaller yachts ranging from 200,000 to 400,000 yuan are almost as good as those that cost more than 10 million yuan.

The company sold more than 10 small yachts last year, seeing an almost 20 percent increase year-on-year. The small yachts, which are about 4 to 5 meters in length, sell especially well at BAFS Yachting.

"These relatively cheaper yachts are mostly used nearby. Most of the customers are individuals," says Lyu.

Hu Xiaoming, sales director of Visun Royal Yacht Club in Sanya, says yachts ranging from 40 to 50 feet (about 12 to 15 meters) in length had good sales last year. But he also warns that "the more expensive a yacht is, the fewer the number of people will buy one," especially when the economy is not that promising.

Lars Petersen, general manager of Jebsen Marine, is also very happy to see sales of smaller boats rising in China although their company specializes in the sales of super luxury yachts such as the British brand Fairline.

"Although the marinas are not full of yachts at the moment, you see more and more of them. It is also fun with smaller yachts. The attraction starts with jet skis, which are quite fun too, and moves on to maybe even some locally produced yachts," says Petersen.

"It is important that the whole industry including small boats, sailing yachts and large yachts moves forward and develops," he adds.

Zhang Xiaoxian contributed to this story.

Previous news: Starwood Hotels & Resorts to have more hotels in Hainan than Hawaii