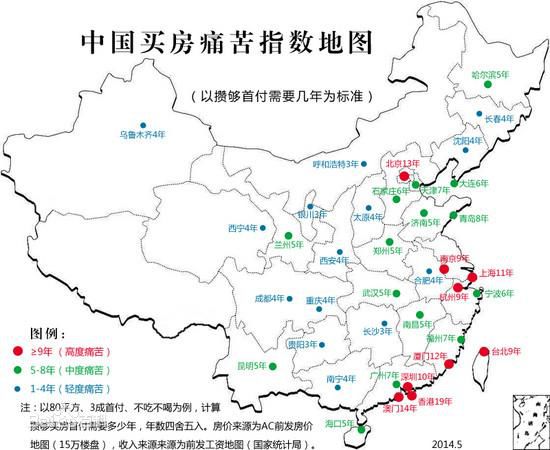 An average wage earner has to save for 13 years just to raise the down payment for a small flat in Beijing — if he or she can live on thin air.

The Chinese capital is one of nine places that are marked as “red zones” in an unofficial map indicating how much home buyers suffer in different parts of the country.

In the red zones, home buyers have to scrape together every single cent they earn for at least nine years — without spending anything even on food — to cover the down payment for a home no bigger than 80 square meters in floor space.

The down payment makes up an average 30 percent of the home price.

According to this “map,” which has become popular on the web since Friday, home buyers in Beijing are the third most miserable groups after those in Hong Kong and Macao, where ordinary wage earners have to save 19 and 14 years respectively for the down payment.

Other Chinese cities that are printed red on the map include Xiamen, Shanghai, Nanjing, Hangzhou, Shenzhen and Taipei.

It is unclear who drew the “map of Chinese home buyers’ agonies.” But a note at the bottom of the map says the different degrees of agony were calculated on the basis of average income levels released by the National Bureau of Statistics, and average home prices collected from real estate markets in the different cities.

The calculations have also triggered complaints from web users, who claim their incomes are actually below the average level, while the actual home prices are even higher than what the map suggests.

“The average income level on the map is 7,100 yuan a month in Beijing, but I make only 5,000 yuan,” said a netizen with the screen name “A-ling” on Weibo.com, a Twitter-like microblogging site.

Meanwhile, the map indicates Beijing’s average home price is 47,000 yuan per square meter, but apartments in downtown areas, particularly near the city’s top schools, can sell for three or four times as much.

Fifteen cities are printed green on the map, including Tianjin, Harbin, Qingdao, Wuhan, Kunming, Haikou and Guangzhou. Home buyers there need to save from five to eight years for the down payment.

It is relatively easy to buy a home in the less developed western cities, including Urumqi, Xining, Xi’an and even Chongqing Municipality, and landlocked cities of Taiyuan, Changsha and Shenyang, where an average wage earner needs to save for less than four years. These cities are printed blue on the map.

Lhasa is the only regional capital unmentioned on the map, as real estate is only fledgling and most residents, with their own property, have little demand for commercial housing.

Despite the decline, owning a home remains one of the biggest challenge for China’s young urbanites, particularly in big cities such as Beijing and Shanghai.

Staggering home prices have forced a multitude of new graduates to flee big cities and settle down in second or third-tier cities or back in their home provinces.