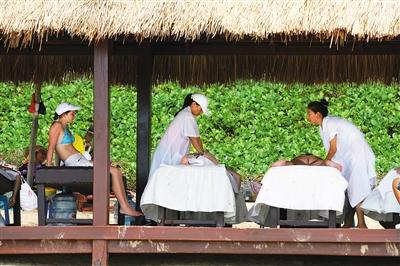 Russian tourists are flocking to China's southernmost costal resort of Sanya in Hainan Province as they seek tropical beaches and get away from their country's winter chill.
The city of Sanya is the only tropical tourist destination in China, with annual average temperatures of 25 degrees Celsius. It has seen a surge in Russian tourist numbers in recent years with about 190,000 in 2012, according to Zheng Conghui, Sanya Tourism Commission spokesman.
In 2006, the number of Russian tourists to Sanya was 84,000, less than half the figure of last year.
The 2012 figure of Russian visitors represented 42 percent of the city's total number of overseas tourists, which was 450,000.
The rise in the number of Russian tourists is thanks to various convenient policies as well as other factors, Zheng said.
Word-of-mouth recommendations among Russian visitors, increasing regular flights and tourist charter travel have all contributed to the surging inflow since 2007.
Airlines link Sanya Phoenix International Airport with 15 Russian cities, including Moscow, St Petersburg, Irkutsk and Vladivostok.
Russians are also taking advantage of a visa-free policy in Hainan that enables them to join tour groups and register with authorities just one day before their scheduled departure date.
The State Council, China's cabinet, gave Hainan permission to implement a duty-free program on a trial basis in April 2011 as part of efforts to promote the province as an international tourist destination.
More importantly, the weather in Sanya is a significant contrast to that of Russia, with many visitors wanting a sunny beach vacation, said Zheng.
Trofimova Olga is a 51-year-old engineer from Tyumen City, in West Siberia and is on holiday in Sanya. He said, "Amazing days in Sanya. I just lie on the beach with the sunshine and tender sea breeze."
It is his third vacation to the city, and on this occasion Olga has signed up to a 14-day treatment course with traditional Chinese therapy as he suffers from chronic disease in his leg.
"I am refreshed after the treatment and my physical condition is improving," he said.
Russian visitors are also attracted to the tourist, medical and recreation services because of their reasonable prices.
Olga paid about 20,000 yuan (about 3,218 U.S dollars) on his vacation, including flights, accommodation and traditional Chinese therapy.
"I have traveled to many cities in various countries. Sanya provides the most cost-effective vacation experience," Olga said. He added that the traditional medicine therapy was an "unexpected present" that he cannot enjoy in any other country.
Other attractions for visitors is that restaurants offer a Russian menu and employees working in the tourist industry can speak Russian.
Some Russians liked Sanya so much they stayed.
"It is like a leisure activity for me to cook Russian food in a beach restaurant," said Nezheleva, who did not want to give her surmane. She cooks in a Russian restaurant on Dadonghai Beach.
"In the peak season, we receive about 400 Russian tourists offering them authentic Russian dishes as well as Chinese food," said Nezheleva, who relocated after quitting her job in Russia's snowy far east region.
Andre Ivanov, 57, is founder of Hainan Zhujiang International Travel Agency and was honored with the national Friendship Award in 2010 for his contribution in promoting Sanya to Russians since 1994.
He helped with the first charter tourist flight in 1997 when 100 Russian travelers from Siberia visited Sanya.
"I established my own tourism business in Sanya and settled here with my Chinese wife. I am proud to bridge this Chinese resort city with my motherland," he said.
SOURCE: china.org.cn
Editorial Message
This site contains materials from other clearly stated media sources for the purpose of discussion stimulation and content enrichment among our members only.

Next news: BMW Asia Boating Awards 2013 to be held in Sanya on March 29