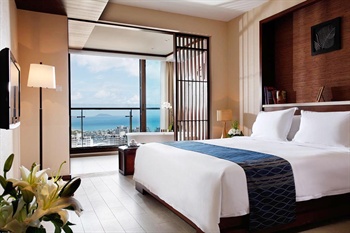 Sanya in Hainan province, and Thailand are expected to top the list of travel destinations for Chinese during Spring Festival, as they seek to escape the winter chill.
Peng Liang, from the tourism vacation department of China's online travel service C-trip, said mainland bookings for Sanya have surged 20-30 percent from the same time last year, making the island resort the country's most popular holiday destination.
A document released by the Hainan provincial government in December stipulated that hotels must reduce their room prices by at least 10 percent during Spring Festival, which starts on Feb 10, compared with last year's prices.
The highest daily cost for a standard room with service charge included should be less than 5,000 yuan ($802), according to the price authority.
Hotels need to get approval from the government if prices exceed the cap, and other items have been given limits, such as on restaurant buffets, which should not exceed 400 yuan per person.
"The price order has given tourists more confidence," said Peng, adding that he has noticed a 10 to 15 percent drop in Sanya's hotel room rates.
"A sea-view room at the Hilton, for example, was 7,000 yuan per night last year (during Spring Festival), while this year it's under 6,000 yuan."
Hainan, especially Sanya, attracts thousands of visitors at this time of year, seeking southern warmth and sunshine in what is a chilly winter for many parts of the country.
But the onslaught of visitors during Spring Festival had previously pushed prices much higher than normal.
According to Fu Dawen, an official from Hainan's price bureau, the average room rate at its 267 hotels during this year's festival is expected to be 2,873 yuan, 15.7 percent less than last year.

"There's a significant decrease in the room rate as you can see. Around 23 percent of Sanya's hotel rooms charged over 5,000 yuan during Spring Festival in 2011, while this figure now is just 9 percent," he said.
From January 1, when the price-ceiling policy came into force, C-trip saw an 80 percent surge in travelers going to Sanya compared to last year.
Guo Xu from the Ritz-Carlton Sanya's public relations department, said that a standard room now follows the 5,000 yuan cap policy.
Nine high-end hotels in Sanya including the Ritz-Carlton, however, still charge more than 5,000 yuan for some rooms per night.
"The room-price ceiling doesn't affect luxury suites and villas," said Guo.
A spokesman for St Regis Sanya Yalong Bay Resort said her hotel's room rate has been settled at around 5,000 yuan this year, from between 6,000 to 7,000 yuan last year.
"But the reduced rate hasn't really affected our business as there are only a few hotels along Yalong Bay, where we are, and so we're always fully-booked no matter what."
Meanwhile, Thailand is listed as the most popular outbound tourist destination for Chinese, followed by Singapore, Bali in Indonesia and Cambodia.
"Thailand's handy location and its hospitality culture have attracted increasing numbers of Chinese in recent years," said C-trip's Peng Liang, adding that the number of bookings have doubled this year, compared to last year.
Wang Xizi, a 28-year-old Shanghai resident who has just booked her tickets to Thailand, said: "It's my fifth time there. The price of my hotel and flight have increased slightly this year, but it's still affordable."
SOURCE: China Daily

Next news: Hainan Airlines refutes cancellation rumors of its ten orders for B787-8s