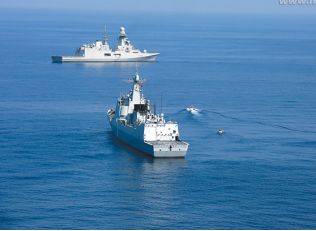 TWO fleets of Chinese marine surveillance ships are carrying out separate regular patrol missions simultaneously on the South China Sea, the State Oceanic Administration (SOA) said on January 19.
Haijian 84 and Haijian 74 left Guangzhou port on Monday and arrived at the waters south to the Xisha Islands, an administration statement said, adding that they would continue patrolling to the south.
The second mission also started on Monday, as Haijian 262 and 263 left Sanya to patrol on the waters near the Beibu Gulf.
Both fleets found no foreign intruders or unusual situations, the statement said.
Chinese marine surveillance ships carried out 58 patrol missions on the South China Sea in 2012, according to the SOA.
On Thursday, SOA director Liu Cigui said that the country will continue to carry out regular patrols over its territorial waters off China's Diaoyu Islands and the South China Sea to secure the nation's maritime rights and interests.
SOURCE: Shanghai Daily
Editorial Message
This site contains materials from other clearly stated media sources for the purpose of discussion stimulation and content enrichment among our members only.

Next news: 10 Qilou buildings in Haikou open to public after renovation