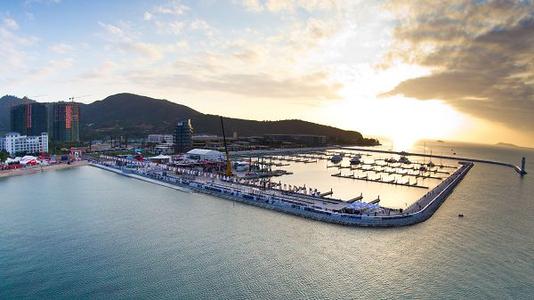 ICOMIA has signed a long-term agreement to support the International Boat Show and Festival – a new four-day boat show commencing 17 October 2013 at the Serenity Marina, Sanya, Hainan Island in China.
The show will focus on mid-range boats (10 – 15 meters) afloat and small craft ashore for watersport promotion. The International Boat Show and Festival is organised with the assistance of the Beijing based China Cruise and Yacht Industry Association (CCYIA), a full Member of ICOMIA.
In response to these very challenging economic times in the traditional markets, ICOMIA has been seeking opportunities to assist the marine industry, in particular the boatbuilders, and has consequently focused on China, as few would argue it is the market with the greatest potential; the country is huge with an emerging middle class with improving disposable income.

The organisers wish to encourage the establishment of national pavilions for exhibiting boats by ICOMIA’s Marine Industry Association (MIA) members. “There are so many boat shows in China, (currently 39 in total), that it is impractical for the industry to participate and get involved in them all” says Tony Rice, ICOMIA Secretary General, “we need to unify, and together support just one show. If we all concentrate in one well organised and well financed show in a prime location we have the best chance of success and the least risk – in other words; better together”. Mr Rice continues, “ICOMIA has witnessed the growth curve of METS, which is why we have signed a long-term agreement – This is a sign of our commitment on behalf the industry”.
There is significant national and provincial government support for the International Boat Show and Festival. The Chinese Government has a policy of promoting watersports and the development of boating is an integral part of the Provincial Government’s plans for the island with 15 separate boating development policies published.
Hainan lies at the south-east corner of the Chinese mainland and is equivalent in size to Belgium.
Thanks to its semi-tropical climate, mangrove forests, coral reefs and golden beaches, Hainan Island is the holiday destination for the Chinese and in addition welcomes 800,000 foreign visitors per year. The city of Sanya, situated at the south east corner of the island, is the main tourist centre of Hainan.
The International Boat Show and Festival will be held Sanya’s Serenity Marina, specially build as a state-of-the-art marina in order to welcome the 2011- 2012 Volvo Ocean Race. With 330 yacht berths, Serenity Marina’s stunning facilities set new international standards in the South China Sea region. The Marina is a short distance from the city centre and Sanya Phoenix International airport – which operates 80 domestic and international flights daily, including direct flights from Hong Kong.
"Significant market research has concluded that a show based in Hainan offers an excellent chance of success and that the Chinese consumer wants to purchase well established 'Western’ brands” says Tony Rice, “this is a carefully considered strategy by ICOMIA to best serve the interests of the established global marine industry, its MIAs and their members and offers an opportunity to establish a showcase for our boatbuilders”
SOURCE: bymnews.com
Editorial Message
This site contains materials from other clearly stated media sources for the purpose of discussion stimulation and content enrichment among our members only.