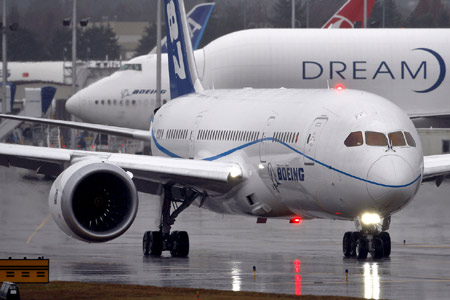 A Boeing 787 Dreamliner prepares to take off from Paine Field in Everett, Washington. In terms of pilot training, Boeing is moving a 787 flight simulator to Shanghai, to join five simulators for the 767 model already housed there.
The US planemaker is looking to enhance its Chinese partnership

The partnership between China and the airplane maker, Boeing, is a long-standing one, and is set to increase.

According to the US-based company, its procurement from China is "significantly greater than other aviation companies. Boeing is China’s aviation manufacturing industry’s largest foreign customer".

"When you look at all our joint ventures in China, we employ about 6,000 people in total," said Randy Tinseth, vice-president of marketing at Boeing Commercial Airplanes.

Ray Conner, vice-president and general manager of supply chain management and operations, made his first trip to China in 1988. He was part of the Boeing team that moved the production of vertical fins to Xi’an, Shaanxi province.

Conner showed me a map of China marked with dots indicating field services, technical support, training and flight simulators across the country. Its field services reach as far west as Ngari, in the Tibet autonomous region, to Harbin in Heilongjiang province in the northeast, and to Haikou in the south. It also covers some second- and third-tier cities such as Dunhuang in Gansu, Jiuzhaigou in Sichuan, and Nyingchi, again in Tibet.

Apart from the vertical fins manufactured in Xi’an, horizontal stabilizers are made in Shanghai and a joint venture in Tianjin produces interior component parts and non-metallic composite components for airplanes, Conner said.

Chinese manufacturers in Shanghai, Xi’an, Tianjin, Chengdu and Shenyang also contribute parts to Boeing’s "next-generation" 737, the 787 Dreamliner, and the 747-8.

"I’ve watched our relationship grow" and China is "participating in every one of our airplanes today," Conner said.

Emphasizing that Boeing has been a "solid, quiet and dependable" partner, Conner said his company has been "part of the fabric of the whole aviation industry in China".

A model of a Cathay Pacific freighter stands by the door in the office of Lou Mancini, senior vice-president in charge of commercial aviation services. A piece of an airplane is displayed on the other side of the door.

The piece was cut from a 747-400 Cathay Pacific plane to create a cargo door when the craft was converted into a freighter in 2005.

It was the first conversion undertaken by Taeco-Taikoo (Xiamen) Aircraft Engineering Co Ltd, a joint venture in Xiamen which specializes in airplane repair, maintenance, part manufacturing, component service and conversion. Boeing holds a 9.1 percent stake in the venture..

A computer monitor in Mancini’s office, which is linked to its operations center, maintains an almost real-time watch over the 1,500 Boeing airplanes while they are in the air. It is a "fancy prognostic forecasting system, so you can monitor your airplane and figure out what maintenance it is going to need in the next few days," Mancini said.

Around the world, 40 customers, including Air China, use the systems, so that their fleets can be serviced 24 hours, seven days a week.

"You can know the exact status of an plane in 20 seconds," Mancini said. "I can log on at home with my iPad and watch planes flying."

In terms of pilot training, Boeing is moving a 787 flight simulator to Shanghai, to join five simulators for the 767 model already housed there, Mancini said.

Boeing is also involved in cruise scheduling in China. Before the 2008 Beijing Olympic Games, the company worked with Beijing Capital International Airport to optimize the airspace around the airport to help increase capacity.

Mancini highlighted the Boeing service teams now spread across China. With the required navigation-performance technology, Boeing has worked with Chinese airlines, enabling them to fly into Nyingchi, between the mountains on the roof of the world.

"We are very interested in air-traffic management, and we would like to help China out," he said.

"We are global but local," Mancini said. "I cannot imagine supporting the world without being local."

Despite a Mandarin table at the operations center, Mancini said Boeing will build a satellite facility in Beijing which will be operational around June. It will also be connected to the computer systems at a main operations center and with all the telecommunication systems in the United States.

"It will allow us to better understand China’s market and its growing needs," Mancini said.

He said Boeing is likely to employ more local people who understand the culture.

"I will never be able to understand Chinese culture, so I need to get more people on the team who do,"

"You have an massively expanding market, and we want to be part of it obviously," Mancini said. "So we think we’d better be very close to you, geographically and culturally so that we are providing such good support that you want to be on our team".

Meanwhile, technological upgrades are essential in the growing aviation industry. "The 787 Dreamliner has so much technology on it that it is a completely new generation in aviation that no one has seen before," she said.

"We want to be viewed not as a company that goes to China to sell airplanes. We want to be viewed as a partner. A partner that not only sells airplanes, but buys parts there, contributing to the infrastructure, and to the future of the aviation industry," said James F. Albaugh, executive vice-president of Boeing Commercial Airplanes.

Next news: Sanya-born singer Chen Chusheng to take his music to a new height