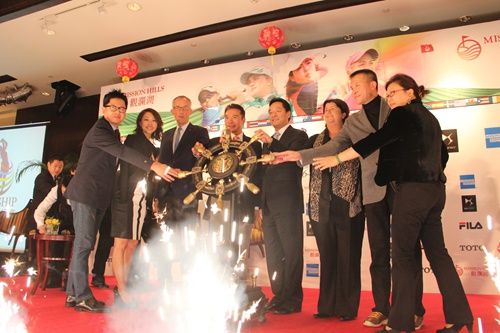 Sanctioned by the Ladies European Tour (LET) and China Ladies Professional Golf Alliance (CLPGA), the event will feature a field of 108 players from both tours as well as players from LPGA tours of the US, South Korea and Japan. Other leading international players to confirm their participation in the event, which will award Women’s World Golf Rankings points, include world No.1 Inbee Park of South Korea and world No.2 Suzann Pettersen of Norway.

The four-day tournament will be played on Mission Hills’ Sandbelt Trails Course and will once again feature a unique three-in-one format consisting of an individual professional competition; a professional team competition in which the scores of the top two players from 18 countries represented will be combined to determine the winning team, with China as host nation fielding two teams; and a stroke-play individual amateur competition. All three will be played over 72 holes.

This is the third time China has hosted such a prestigious golf event.

Two golfers chosen from each of the 18 countries and regions will take part in the team match. The world’s top golfers from Women’s Professional Golf Tour of the US, South Korea, Japan and Australia as well as Europe and China will compete.

Among attendees at the Shenzhen press conference were the director of the Multi-Ball Games Administrative Center of General Administration of Sport and deputy chairperson of the China Golf Association Wang Liwei and Chinese Women’s Professional Golf Tour official Li Hong.

The Chinese Women’s Professional Golf Tour, established in December 2008, has been actively enhancing cooperation with the world’s golf organizations to allow Chinese golfers to communicate and cooperate with some of the world’s best golfers.