Sanya suffers in the wake of Typhoon Son-Tinh, incl. 1 dead and 5 missing 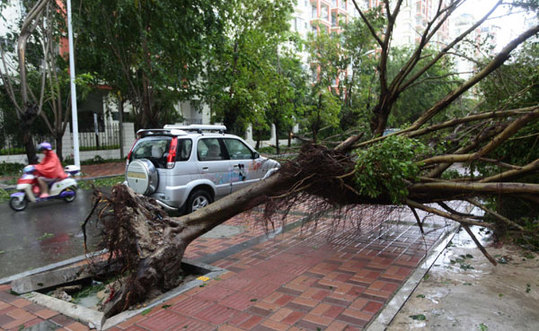 A tree is brought down by strong gales in Sanya, Hainan province as Typhoon Son-Tinh brushed into the region on Oct 28, 2012. [Xinhua]

A resident wades through water on his motorcycle in Sanya, Hainan province as Typhoon Son-Tinh brushed into the region on Oct 28, 2012. [Photo/Xinhua]

A worker does cleaning on a flooded road in Sanya, Hainan province as Typhoon Son-Tinh brushed into the region on Oct 28, 2012. [Xinhua]

Typhoon Son-Tinh has left one person dead and another five missing, the Ministry of Civil Affairs said Monday.

Local sea rescue center in Sanya, Hainan Province, received a report at about 6 a.m. saying an unpowered engineering vessel half-sanked near a cargo terminal of Sanya after being hit by strong winds.

Five crew members were awaiting rescue as they clung to the deck that remained above the sea, the report said.

Sanya’s maritime safety administration said they have launched a search that involved rescue vessels and helicopters.

The typhoon has also forced around 126,000 people to be relocated in south China’s Hainan Province as of 5 p.m. Monday.

Son-Tinh has affected around 1.26 million residents in the province’s 11 county-level regions, the ministry said.

The typhoon has destroyed more than 700 houses and damaged more than 2,400 others. It also affected 41,100 hectares of crops, leading to direct economic losses of 910 million yuan (about 145.73 million U.S. dollars).

Son-Tinh, the 23rd typhoon of the year, weakened to a tropical storm on Monday morning.