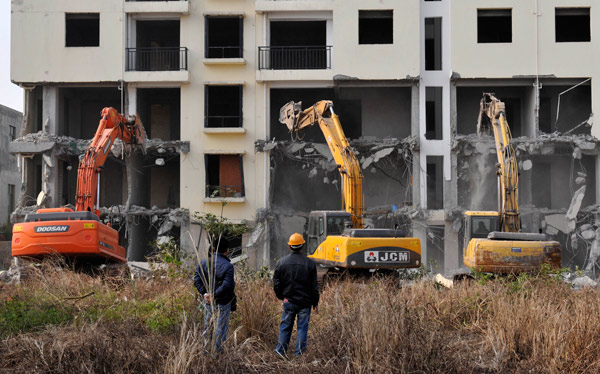 Housing was illegally built on collectively owned rural land located in the suburbs of Haikou and marketed to people who are not part of the collective land ownerships.

Such purchases are not legally protected, and urban residents are prohibited from buying this type of housing. But as property prices have risen, so, too, has the problem of illegal residences.

Chen Dong, deputy head of the law enforcement department under the city’s land and resources bureau, said that the housing projects in the Haikou suburbs were built by the villages or townships themselves or in cooperation with developers from other cities.

The so-called limited property rights houses have been a problem across the country. On Nov 22, the Ministry of Land and Resources issued a notice forbidding the building or selling of such dwellings.

On Friday morning, a set of 10 buildings of this type located in Meilan district fell after the land and resources administration authority repeatedly warned of its illegality.

Construction was almost done, interior work had begun and elevators were already installed, said a construction worker from Chongqing who wouldn’t give his name.

"I was surprised the government took action against the construction. My boss said the warnings from the government would not turn into a forced demolition," he said.

Two other such sites were in Xiuying and Longhua districts.

According to Chen Zhong, deputy head of the Xiuying district, limited property rights housing has been on the rise as homes have become more and more expensive.

But many illegal buildings never received approval from authorities, and are dangerous to residents because of their poor quality and lack of facilities, Chen said.

In Chen’s district, ground zero for limited property rights housing projects is Xinhai village, which is conveniently located near the coast.

The village head and the Party chief of the village were detained by police due to the large scale of illegal construction in the village.

Since Haikou launched its campaign to tackle the problem, 150 buildings in the village have been demolished — more than 90,000 square meters.

The city began its campaign in September and plans to finish the demolitions by the end of 2014 in the city center, according to its land and resources bureau.

Chen Dong, the law enforcement official for the bureau, said the main goal of Friday’s demolitions was to curb the trend of illegal buildings on rural land. "The dangerous part of those buildings was that they hurt the homebuyers," Chen said.

After demolition is complete, the bureau plans to build standard housing on the sites.