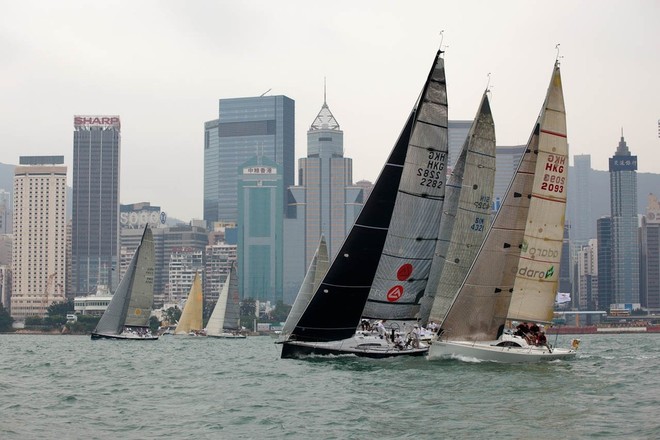 First contested in 1997, the Hainan Race was a biennial alternative to the Hong Kong to Vietnam Race – until 2009, when logistical issues proved insurmountable and the event was slipped into the ‘too hard’ basket and mothballed. But you never quite know how the bureaucratic dice are going to fall in China, and now the RHKYC along with local organisational partners in Hainan is delighted to have the Dash to the End of the World back on the calendar. [‘The End of the World’ is the last headland before the finish line off the Serenity Marina at Sanya, in case you didn’t know].

Twelve boats lined up today to start in Hong Kong’s Victoria Harbour at 1220hrs for one of the best distance-race starts that we have seen from the RHKYC Club Line – grey and gloomy to be sure, but with 10-12kts of breeze to send the fleet on its way under the looming gaze of the skyscrapers of Central and Causeway Bay.

RHKYC Hainan Race 2012 – Xena makes the pace up the harbour
The race record of 29h 25m 08s is held by Sam Chan’s Ffree Fire, a 71’ ULDB sled that set the record in 2005. This time Chan is competing in his latest edition Free Fire, a TP52. Although they were last of the racing fleet over the line, they were second through Lei Yue Mun Gap out of the harbor, snaping at the heels of another TP52, Jelik 5, a Philippines entry skippered by Judes Echauz and crewed by young dinghy sailors from the Philippine Sailing Association. It was all ‘good breeze’ up the harbour, with a few shifts to make it interesting and a strong outgoing tide to send the boats on their way. Geoff Hill’s venerable and substantially-modified Santa Cruz 72, Antipodes, rolled through the gap in third place. Antipodes has on board Larry Jamieson, veteran on no less than 27 Hobart Races, who enjoys the distinction of having won that event under IOR, IMS and IRC.

Before the race Judes Ecauz said, ‘We wanted to come up to do China Coast Raceweek because we have never done this series before. We have competed in several China Sea Races, but I really like the opportunity to do the inshore series before heading offshore. And the destination is Hainan, and we’ve not been there before, so it has to be done.’

RHKYC Hainan Race 2012 – Jelik 5, first out of the box, first out of the harbour –
‘We particularly enjoyed the China Coast Regatta – it was well organised, and you are racing in such a competitive and high quality fleet. We sail in other Asian regattas, but Hong Kong’s exceptionally strong racing community makes for a much more exciting sailing environment, the likes of which are just not found outside Hong Kong, and the boats that make up the fleet are the top of the range… where else in Asia do you find such an outstanding and competitive fleet?’

Echauz believes that his dinghy sailors have a good chance of winning the Hainan Race – ‘we are exceptionally well prepared this year, we have a complete new suit of sails and asymmetrics so hopefully we will be ready for any of the wind conditions that we meet.’ Jelik 5 will be chasing Free Fire’s ‘perfect score’ from the China Coast Regatta – tough call – but will be treating the long race as a stand-alone. Yes we need more practice round the cans, but 360nm in (almost) a straight line is more about concentration and making the big calls. We are ready.’

The competition for IRC Overall will be equally gripping, with Jonno Mahony’s Zanzibar, IRC Overall winner of the Rolex China Sea Race 2012 up against Anthony Root’s Red Kite II, IRC Overall winner of the San Fernando Race 2011 and Mills 40 EFG Bank Mandrake, who came a very close divisional second to Zanzibar in the 2011 VinaCapital Hong Kong to Vietnam Race. Mahoney was very understated when asked why a Singapore boat was – once again – gracing a Hong Kong start line. ‘We don’t go so well round the corners, and there aren’t so many corners on the way to Hainan as there are in a windward/leeward race. Besides, we’ve never been there, and it’s time to go and have a look.’

RHKYC Hainan Race 2012 – Free Fire passes the mark at Lei Yue Mun –
EFG Bank Mandrake will also be hoping to add to her first in division at the St. Regis International China Coast Regatta with a win in Racing Division 1, but Ambush, Sell Side Dream, Wicked and Avant Garde will also be looking for glory in the 40-footer division and will not be making it easy for the Burns/Kinmonth partnership. On board Sell Side Dream, Will Oxley has been to Sanya before – with Camper in the last Volvo Race. ‘I know where we are going, but I hope it won’t be as a tough a ride as the one we had coming away from Hainan last time.’ (Relax, Will, it’s downhill this time).

X-55 Xena could also prove dangerous in the overall standings, although as the only Premier Cruiser she is guaranteed first in division, as is Koon Woon, the lone HKPN representative. All boats will be tracked using the proven Yellowbrick tracking system, with the first boats expected to arrive early Saturday morning, and the tail end to finish on Sunday.

Did you know? Hong Kong starts don’t happen at 1200hrs to avoid – just in case – any confusion from the nearby Noonday Gun, still fired at 1200hrs every day.

At the 1800hrs radio sched, based on the last hour’s progress, Yellowbrick tracking was showing Free Fire leading on the water having hauled past Jelik 5, and on course to finish at around 1400hrs tomorrow. While technically, as this is the first time the Hainan Race has started in the harbour, whoever wins line honours sets a new record, it would surely be sweet for Sam Chan and the boys to break their own 2005 record of 29h 35m 08s.

The meteo witch doctors are calling force 5 to 6 overnight. One casualty so far – CY Seah’s A40 Avant Garde retired some miles south of Lamma Island on account of a nasty spinnaker wrap, but all souls on board are safe and well and heading to back to check in with HK Immigration.