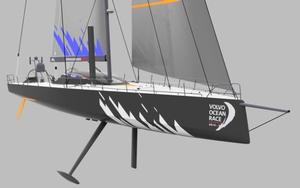 The new Farr-designed Volvo 65. Image Farr Yacht Design/VOR.
The Volvo Ocean Race has appointed Australian Nick Bice, shore manager for Team Sanya in the 2011-12 edition, to manage its Yacht Maintenance Centre which will oversee shared services for teams competing in the new one-design boat in the 2014-15 race.

Bice, 34, has sailed in two Volvo Ocean Race campaigns and been involved on the shore side in two others.

His involvement with the world’s leading offshore sailing event goes back to 2001-02, when he was a boat builder with the Amer Sports campaign. He then raced with ABN AMRO TWO in 2005-06 and Delta Lloyd in 2008-09 before joining Team Sanya as shore manager during the past edition.

His fifth race will see him take on the key role of Yacht Maintenance Centre Manager for 2014-15, the first edition to be contested by the new 65-foot one-design boats designed by Farr Yacht Design and built by a four-boatyard consortium – Green Marine (United Kingdom), Persico (Italy), Multiplast (France) and Decision (Switzerland).

"The new one-design concept extends a lot further than the boat,” Bice explained. “We’re setting up a Shared Services Centre, even to the extent that all the bases are going to look exactly the same. So we’re not only turning the boats into one-design: we’re hopefully turning every element of the race into a one-design race.

"I’ll be helping out all the suppliers and supplying the service to the teams to make sure their boats are 100 percent not only for the race but also at the stopovers.”

Volvo Ocean Race Chief Operating Officer Tom Touber believes Bice has all the skills and experience needed for the job.

"With his background both as a sailor being involved in the race twice as well as shore manager/boat captain, he has exactly the experience to run this important part of the next race,” said Touber.

"Personally I have very positive experience with Nick in both in the challenging two-boat campaign with ABN AMRO, where he was intensively involved from the day we built the boats to the moment we won the race.”

"It’s fantastic to have Nick on board,” said Müller. “He comes in with a vast amount of experience in both sailing and fixing the boats. He is trusted by all the teams and sailors and for our consortium of boatyards. It’s another important milestone defining the Service Centre. Having a strong partner in there like Nick will add to the success of this boat.”

The switch to the new 65-foot one-design boat makes it simpler – and cheaper – for teams to enter in 2014-15 and the shared services concept is a key part of that.

"All the teams will still have a shore crew but there will be no need for the teams to have an excess of shore crew,” the Australian said.

"Doing this also reduces the cost of an overall team budget. You don’t need 15 or 20 shore crew on your books for the length of the race, which when you add up all the logistics, the flights and all the wages, is a big chunk of the budget.”

Bice added: “From a sailing point of view, some of the best racing I’ve ever done has been on one-design boats. That makes it very exciting. It basically means everything is left to what we do out on the water.”

Next news: Golf ain’t golf, all the fun that goes at the Mission Hills Haikou