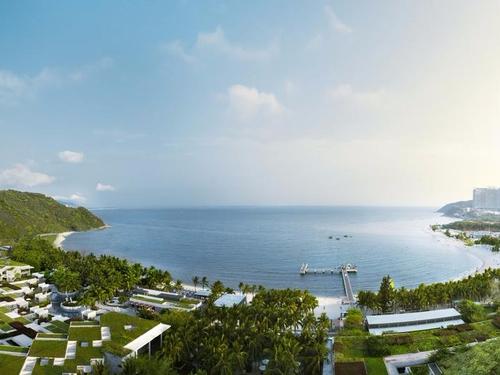 Away from snow and ice, a well-known American ski manufacturer runs his business in perhaps the most unlikely location in China — Sanya, a popular tropical resort city on the southern island of Hainan.
Skilogik's founder David Mazzarella bade farewell to his beloved Colorado and moved to his new home and business headquarters in Sanya five years ago. He said he moved his operations to China in order to "produce the best skis possible."
For Mazzarella, the best skis are always hand-made, and given the labor costs in the U.S., he couldn't run a sustainable business. Therefore, he shifted his ski-production base to China.
Rather than outsourcing mass-production, David set up his own production facility in Sanya to produce just 10 to 15 pairs per day of artisan skis. He intends to increase the amount of labor on each pair and use higher priced materials without affecting the sales price.
Mazzarella's dream was to make handcrafted skis "with unlimited amounts of labor and using the best materials from around the world."
The skis are made almost solely by hand, right down to the wood veneer graphics designed by Mazzarella's wife and Skilogik's in-house designer.
The labor-intensive model gives Skilogik the production flexibility while maintaining competitive prices.
Since he and his family are from the snowy mountains of Colorado, Sanya's beaches made for a fun contrast.
"We love mountains and snow in Colorado, and we also like tropical islands. It's great to have homes at both places," he said.
He now has a staff of over 60 from various parts of China, as well as some foreign students working as interns.
With demand growing at 100 percent every year, Mazzarella sees many more opportunities in China and is considering making his skis available in the local market.
"We initially set up the factory just for exports, but now the market in China is growing, and they want very high-quality products," he said.
But when he first came to Sanya, it was a different city. At that time, Mazzarella couldn't find a facility that was suitable, so he had to build a factory from scratch.
Thanks to the help of the local government, he finally found a location for his factory.
Yet even after construction on the factory had started, Mazzarella's worries were not over.
Sanya was less developed at that time, so there wasn't a bus for workers to come to his factory.
"There were rice fields and farmers, and it was far out of the city. We had people coming to check out our place, and then they'd say, 'we'd like to work for you, but it's too far'," Mazzarella said.
However, Mazzarella was lucky. Due to the fast development of Sanya, a train station and bus service was soon added near his factory.
In recent years, Sanya has become one of the most popular tourist destinations in China, and it aims to attract even more.
Last year, a duty-free store covering an area of 7,000 square meters opened in the city, with international renowned luxury brands. The launch of the pilot duty-free project is expected to build the island into an international shopping center.
Skilogik hit the market in 2010 and was awarded the 2012 Overall Ski Of The Year in the U.S. by the Realskiers.com, standing out from 280 skis tested.
Mazzarella says he feels proud that he has not only realized his own business endeavors in China, but also brought his family an enjoyable life in the tropical city of Sanya.
SOURCE: news.xinhuanet.com
Editorial Message
This site contains materials from other clearly stated media sources for the purpose of discussion stimulation and content enrichment among our members only.
whatsonsanya.com does not necessarily endorse their views or the accuracy of their content. For copyright infringement issues please contact editor@whatsonsanya.com