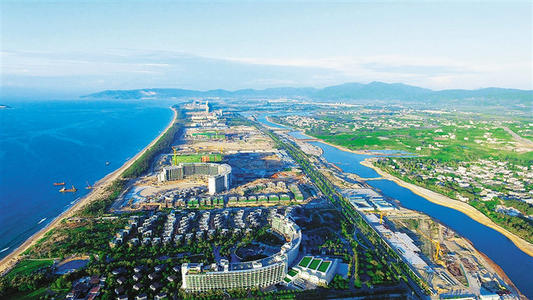 The new promotional card for Sanya Haitang Bay, which is positioned as the National Coast, has been unveiled recently, according to the local government.

The promotional card has been produced by a winning designer and is entitled National Coast in China, Holiday Paradise in the World, which conveys the idea of the strategic development of Haitang Bay.

At the moment the total number of the hotel rooms in Haitang Bay is 3,400, meaning that the region is capable of accommodating one million visitors annually. Haitang Bay is on its way to becoming a high-end tourism zone in Hainan.

A member of the Haitang Bay government has said of the project, Haitang Bay is the largest developing zone in Hainan. He also mentioned that Haitang Bay will be not just a world-class vacation paradise but also a national center for marine research and education.

Starting in August this year, the selection has been welcomed by public participation from a variety of fields. The organizing committee has received a total of 7,000 entries.