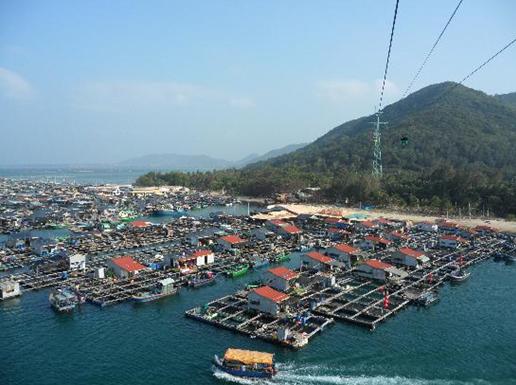 Lingshui county in Sanya, Hainan
Sea fishing has a history of more than 100 years in the West, but, as a leisure pursuit, it only came to China about a decade ago.

But it has quickly caught on, with the sport now being enjoyed by tens of thousands of people.

However, to be any good at sea fishing requires an understanding of the habits and movements of seafish, and the climate they inhabit.

Sea fishing includes boat, beach and rock fishing. Rock fishing is the most difficult and dangerous and requires greater skills, given the complex sea-floor relief near the rocks.

The island province has tens of sea fishing areas and is famous for tropical fish.

Lingshui county in Sanya city has the best sea fishing area in the province thanks to its rich fishery resources and big islands.

Sea fishing is also possible within easy reach of Beijing.

Jingtang harbor is located in Tangshan, a city in Hebei province around 230 kilometers from Beijing. People can go to the open sea to fish at the harbor.

Huanghua harbor in Hebei province is about three hours’ drive from Beijing.

The area, which is suitable for experienced sea fishermen, boasts large fish, weighing around 1.5 kilograms.

The city is next to the Bohai Sea and the Yellow Sea, which is one of China’s four traditional fishing areas. Many islands near the city are suitable for sea fishing.

The sea fishing season in Dalian lasts from April to December. There are more than 30 kinds of seafish in the area.

The province has the longest coastline and the most islands in China, and includes several sea fishing areas, such as Zhoushan and Xiangshan.

The city of Zhoushan includes 1,390 islands, many of which are suitable for sea fishing. More than 40 varieties of fish can be found in those areas. The sea fishing season lasts from April to November, but the best time is September and October.

Xiangshan county in Ningbo city, has seven sea fishing areas and rock fishing is possible on more than 500 islands and rocks. There are 35 varieties of fish in the area.

The sea around Xiamen is suitable for fishing and the best characteristic of the area is that people canfish there in the winter, because the weather is much warmer than in northern China.

Pingtan county in Fuzhou city, which has 126 islands, is also a destination for sea fishing enthusiasts.

SOURCE: China Daily
Editorial Message
This site contains materials from other clearly stated media sources for the purpose of discussion stimulation and content enrichment among our members only. whatsonsanya.com does not necessarily endorse their views or the accuracy of their content. For copyright infringement issues please contact editor@whatsonsanya.com