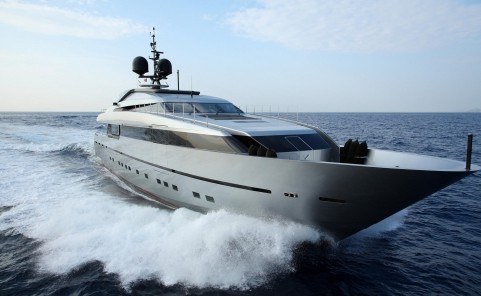 Sundiro has taken a stake in top Italian yacht builder Sanlorenzo.
China’s super-rich are set to become among the world’s most lucrative customers for private yacht builders. Yet will the country also become a global production hub of high-end yachts?

Sundiro is the latest Chinese company with plans to produce luxury yachts.

"Whether their plans can succeed or not would depend on demand from the China market," said Chancy Hua, member of the National Yacht Experts Committee in China and editor-in-chief of the Beijing-based Modern Ships magazine.

"China’s private yacht market will never grow in an explosive way like it has for luxury cars or handbags. Demand for top-end yachts is still very limited. It’s not at all a must-have for every Chinese billionaire," Hua said.

Having been in the industry for ten years, Hua said most of the expensive boat buyers in China were entrepreneurs from property development and IT industries. But billionaires in other industries are rarely interested in owning their own yachts.

"Even those boat buyers prefer a boat made in Italy. Prices are not that important for them although locally-made boats’ prices are only half of one third of that of imported ones," Hua added.

But for Sundiro, the yacht business would bring new hope and profit as domestic motorcycle sales are declining.

According to a report by the China Cruise & Yacht Industry Association, there were a total of 440 yacht manufacturers on the mainland in April this year. They mainly produce small and medium-sized yachts priced from US$150,000 to US$600,000. They are mostly for tourist and commercial use.

Sunbird Yacht Company is one of the few home-grown luxury private yacht makers in China. It now has three factories in Hunan and Guangdong province. Half of its boats are sold for private use.

"To be honest, those who really love sailing would pick foreign brands instead of us. Customers who bought our boats are mainly for showing off and they seldom use it," said Laura Jia, a spokeswoman for Sunbird.

Aside from brand awareness, the gap between Chinese and European-made yachts is not about technology but lies in craftsmanship.

"From the very beginning, our mindsets are already different," said Jia, who has made several visits to European factories.

"They want everything to be perfect. They will use the best materials even in invisible parts inside the boat body. They make sure every screw on the boat is exactly 10 centimetres from each other and all the screw holes are well-polished with no burrs.

"We might also be able to do it as well with a higher production cost. But the problem is the customers would still prefer foreign brands even if our boats are equally good."

Compared to large boats, both industry experts and local yacht builders are more optimistic about the small and medium-sized yacht market as aquatics sports are becoming more popular among the middle-class.

"A locally-made 30-inch yacht is usually priced below 1 million yuan. For some well-off customers, this is pretty much like buying a limousine, which is totally affordable," said Chancy Hua.

"Now we are seeing faster growth of smaller yachts in China compared to bigger ones. We believe smaller yachts are going to be the real driver for China’s private yacht market."