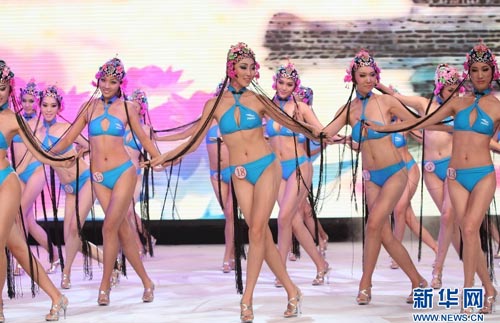 Some Internet users applauded the bikini-styled opera performance as a very innovative move in terms of the cultural exchange between East and West, whereas others blasted the mere idea of putting on such a show, pointing out that this type of presentation degrades China’s national quintessence – and that the bikini-clad models had clearly had no opera training whatsoever.

Li Yulong, the executive chairman of the organizing committee for the Miss Bikini International Pageant and board chairman of Beijing Beauty and Cultural Development Co. Ltd., told Xinhua that the designs were specifically created to support China’s opera culture. The now widely circulated photos were actually taken during a press conference in April this year and all model performers in the show were in fact past winners.

Li said the intensely discussed Peking Opera headdresses had been designed by pageant organizers and were in no way intended to make a mockery out of the Peking Opera culture. He said their fashion was merely a freestyle design which addresses and celebrates traditional Chinese theater culture.

Li thought this kind of opera headdress would give a good representation of Chinese traditional culture. Adding such factors and designs to the pageant would simply make it stand out even more and add to its oriental charm. "This can show Western audiences the true beauty of traditional Chinese culture and promote the oriental aesthetic to the world," Li said, adding, "Our intention is to promote the Chinese culture based on this pageant and we did not set out to deliberately degrade Chinese opera."

Other than opera style, the cheongsam, blue and white porcelain, the Daodejing, Chinese Venice located on the southern Yangtze River, and several other Chinese cultural elements have also made an appearance during the 35th, 36th editions of the pageant. "The bikini is part of the Western culture, how can it then meet and mix with the oriental culture or Chinese culture? That question is a hot topic. How to explore cultural heritage? How to make elements of Chinese culture more intense? These questions all need to be constantly explored and perfected," Li said.