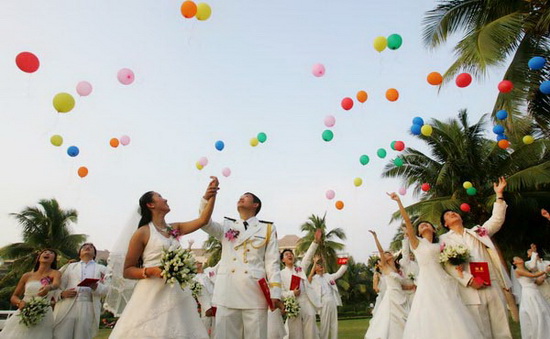 New couples celebrating their weddings in Sanya, in South China’s Hainan province. Sanya is one of the most popular tourist packages bought by online shoppers in China, according to a survey by Taobao, China’s largest online marketplace. (Photo/China Daily)
Shanghai folk like five-star accommodation while those from Guangdong prefer economy

Hong Kong, Beijing and Hainan province’s Sanya remain the most popular tourist destinations for online shoppers in China, according to a recent survey released by Taobao, China’s largest online marketplace.

The survey, which looked at the buying habits of online shoppers in the first half of this year, found that Hong Kong is on the top of the list for netizens when they think of travel, with more than 200,000 people making reservations for hotels in Hong Kong through Taobao’s travel platform between January and June.

The most noteworthy finding was that people from different regions of China tend to have different purchasing habits when arranging their travel.

For example, among those surveyed, people in Hangzhou in East China’s Zhejiang province are more inclined to spend a lot on high-end tours, while those in Shanghai, the economic hub of China, prefer to spend more on lodgings, booking five-star hotels when they arrange their tours.

According to the survey, people in Hangzhou are more casual and are more inclined to travel independently and randomly. It found that 28,791 people from Hangzhou chose to book their air tickets as late as the day of their departure, the highest at a percentage of 14 percent, followed by people from Guangdong at 13.8 percent.

In stark contrast, most Shanghai people prefer to make detailed plans before their trips. Of those surveyed who said they book their air tickets and hotels as early as 30 days before their trip was due to start, at least 20,000 came from Shanghai, the highest figure at 15.4 percent. Shanghai citizens are also willing to spend heavily on their accommodation, especially five-star hotels with sea views at beaches in places such as Sanya.

The survey also found people in affluent Zhejiang province prefer to spend vacations in romantic locations such as the Maldives, Paris, Greece and Rome. Statistics show that among all the online tour bookers from January to June who spend more than 6,000 yuan on each tour ($945), those from Hangzhou, capital of Zhejiang, accounted for 17.8 percent, followed by Ningbo and Wenzhou, two other cities in Zhejiang.

People in Guangdong seem to care less about the condition of their accommodation, ranking first in choosing economy chain hotels and inns.

Next news: Fuzhou gives base to Hainan for Fuzhou Airlines