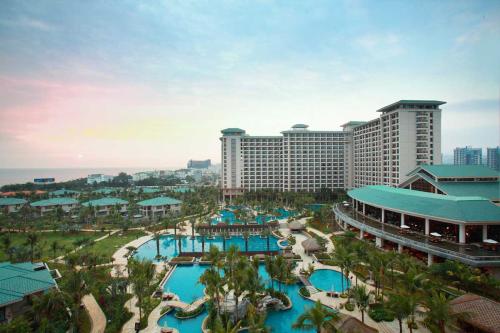 The local government on Monday closed the restaurant of a hotel in the tourism resort of Sanya, in Hainan province, where 120 people became ill after eating breakfast.

The tourists developed symptoms of vomiting, fever, and diarrhea after eating the buffet at the Howard Johnson Hotel in Sanya Bay on Sunday morning, according to a statement by the provincial government's publicity department.

A total of 120 people, including four Russian and two Japanese tourists, were sent to the hospital for medical treatment as of Monday night, said a Xinhua report.

Zou Baocang, deputy chief of Sanya health bureau, said the sick tourists received medical treatment in the hospital and were in stable condition, according to the report.

Li Ximing, a tourist from Guangxi Zhuang autonomous region, said one of his friends had stomach pain. Another developed a fever.

"It might have been caused by eating the fried rice with egg," he was quoted as saying.

The local government suspended the hotel's business on Monday, and the cause of the illnesses is under investigation, according to a report on China Central Television.

The hotel reopened on Tuesday. Wang Li, a manager from the publicity department of the hotel, said guests who developed symptoms after eating breakfast would be compensated, Xinhua reported.
SOURCE: chinadaily.com.cn
Editorial Message
This site contains materials from other clearly stated media sources for the purpose of discussion stimulation and content enrichment among our members only.