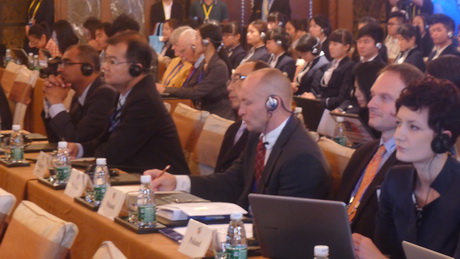 A statement issued during an ongoing forum in south China's Hainan Province, which aims to deepen cooperation between tourism-dependent island economies, has underlined the importance of retaining local characteristics in the face of globalization of the island tourism industry.

The statement was jointly signed at the 17th Inter-Islands Tourism Policy Forum, scheduled to run from Nov.6 to 8 in Haikou City, capital of south China's Hainan Province, by 11 island economies, including China's Hainan, the Republic of Korea's Jeju, Japan's Okinawa, Indonesia's Bali and Sweden's Gotland.

The statement said that, with the deepening impact of globalization, economies have become more integrated and dependent upon each other. Island economies have to explore ways to integrate into the world economy while retaining their own features when formulating economic development strategies and plans.

"Culture is the soul of tourism and tourism the carrier of culture," the statement said. "During the process of globalization, island economies need to vigorously develop the tourism industry while protecting the local culture, so as to lead economic restructuring in their own countries or regions."

By welcoming the benefits of globalization to spur local growth, tourism-dependent island economies also face the risk of becoming homogenized, a trend that could possibly weaken their status as travel destinations, officials and experts warned at the forum.

"Thanks to the development of communication technology and transportation systems, the world has become increasingly globalized and much closer," said Seijun Wakugawa, director general at the Department of Culture, Tourism and Sports of Okinawa in Japan.

"Now it is not rare to see international tourists traveling in remote islands with the information they find on the Internet. Globalization has propelled the expansion of tourist source markets," Wakugawa said.

Globalization has brought more visitors to tourist destinations, but it also has prompted concerns that tourist resorts are becoming generic as their local characteristics are gradually lost, Wakugawa said.

Globalization has caused the wide spread of Western culture and "McDonaldization," while local arts and culture are undergoing commoditization, said I Nyoman Darma Putra, professor at Udayana University in Indonesia.

Hainan has taken a series of measures to protect the near-extinction of traditional artisan skills, such as the local weaving craft and woodcarving of the Li and Miao ethnic groups, according to Song Rui, director of Tourism Research Center at the Chinese Academy of Social Sciences.

Global tourism has seen rapid growth in recent years. Statistics from the United Nations World Tourism Organization showed that there were about one billion international tourists worldwide in 2012, with their expenditures totaling 1.075 trillion U.S. dollars.

The tourism industry represents nine percent of the world's GDP and 30 percent of service exports, and is responsible for creating one out of every 11 jobs, according to the statistics.

For island economies, tourism has played an even greater role. Tourism revenue in Jeju reached about 5.2 billion U.S. dollars in 2012, or 50 percent of gross regional domestic product. The tourism industry in Jeju has contributed to 78 percent of local businesses, according to Woo Keun Min, governor of Jeju.

In this context, proper handling of the relation between localization and globalization has become a common issue for tourism-dependent islands, as the fragility and structural weaknesses of island economies have been revealed, said Hainan's governor Jiang Dingzhi.

The forum, established by four island provinces from different countries — Jeju, Bali, Hainan and Okinawa — in 1997, is held annually. The next forum will be hosted by Phuket, Thailand in 2014.