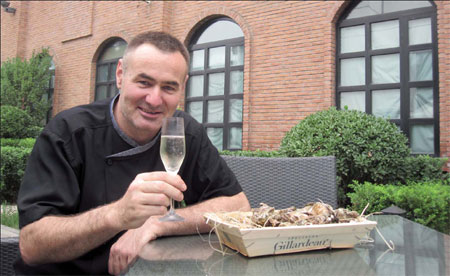 Christian Hoffmann hopes to help develop more restaurants and leave "a lasting legacy to good taste in China".
His father wanted him to be a carpenter, but Christian Hoffmannn found that he was much happier in the kitchen putting together dishes made from local produce than out in the workshop putting together furniture. "As a kid I was always interested to know what was going on in the kitchen, and growing up on a Swiss farm with the best ingredients around the house was a privilege," says Hoffmannn, now serving as executive chef at Grace Beijing Hotel, located in the middle of the capital’s 798 Art Zone.

It was this upbringing in Davos, in the Swiss Alps, that fashioned his philosophy on food and cooking that he still applies today.

His family ran a seven-hectare cattle and pig farm and harvested timber from a small wood on the property.

"I first started to cook my own porridge and later baked simple cakes. Every year we did our own butchery and made our own sausages and dried meat."

Having fresh milk twice a day and vegetables from the garden, Hoffmann’s early life taught him to appreciate the great difference between using processed foodstuffs and fresh produce in cooking.

Now he works closely with China’s organic farming industry, and has seen the potential in using more natural and seasonal local products.

In the small garden behind the hotel kitchen, Hoffmann and his staff grow herbs such as rosemary and arugula, or rocket, as well as small pumpkins, often grown from seeds that he brings back from Switzerland.

He avoids using processed products in his cooking at the Yi House bistro of the hotel, which serves European and Asian cuisine and is based on the concept "from farm to table".

To ensure the produce and producer are right, he has even traveled to the Inner Mongolia autonomous region to visit the farms of the lamb and chicken suppliers.

"It’s such a beautiful place, far from any fertilizers, hormones, antibiotics and all that stuff," he says. "What I saw there convinced me that the producers are honest and respect animals and nature.

"I have also been to an organic fruit and vegetable farm and saw that they are no less concerned and honest than we chefs. Finally, after a long time, I could eat a tasty juicy carrot. That’s the way we’d like the local producers to go."

Hoffmann goes to markets, farms and other suppliers of organic produce around Beijing to check on quality before buying.

His precision with taste and his high standards for ingredients have developed over the years of satisfying his love of fine cuisine and wine.

"I learned about classic French cuisine when training in Switzerland. However, my master chef was very much into nouvelle and Mediterranean cuisine, and I still love Italian cuisine the most today. In Italy, wining and dining is much more celebrated than in northern Europe."

His first visit to China came in 1989, while working on a cruise ship. The experience had such an effect on him that he vowed to return. In 1996 be became one of the first foreign experts employed when the tourism market opened up on the sub-tropical island of Hainan, China’s southernmost province.

His first job was at the Gloria Resort in Sanya city, where in those early days of Hainan he faced the problem of a lack of seasonal vegetables. However, as a consolation, the fresh seafood and fruit "were wonderful".

His cooking philosophy, whether he is preparing food for Chinese guests or those from other parts of the world, remains largely Mediterranean rather than any blend of Asian and European styles.

"Authenticity is one of the most important things in the kitchen and restaurant," he says. "Don’t try to please everyone in the whole world. Each location needs the right concept and food. But fusion is not a solution."

After four years in Hainan, he moved to Beijing, which he found more to his taste as a European chef. The diners had more sophisticated palates generally and were more willing and eager to experience Western dishes.

During the 2008 Beijing Olympics, Hoffmann was in charge of dining at the Raffles Beijing Hotel, where the International Olympic Committee was staying. He considers those 25 days a highlight of his career.

"My team were running like a basketball team and scoring day after day during the Olympics," he recalls. "Many heroes of my childhood, heads of state and royalty were our guests, and all had a remarkable time and commented that the food was just exceptional."

He says it is a very rewarding experience as a chef "to grow youngsters".

"First, they are wild strangers, and after a few years, they are performing very well and even cook better than myself. It’s nice to see them developing a passion and striving for perfection."

As well as inspiring and helping a generation of excellent young chefs and cooks, Hoffmann hopes to help develop more restaurants and leave "a lasting legacy to good taste in China".

Next news: Vietnamese boat with 10 fishermen rescued, stranded off Sansha